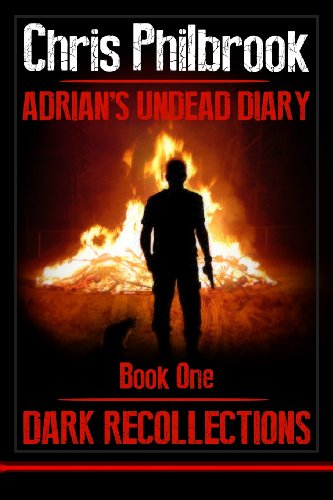 about this book: I started writing Adrian's Undead Diary on a dare from my best friend. As a casual storyteller, and all around funny guy, I was the one who was asked to retell our conquests and failures from our teenage years.

He'd been asking me to write a novel about zobies since we were in High School together.

Dark Recollections is the first book that resulted from his years of badgering. I had no idea AUD would become the monster it has grown into. The story of Adrian Ring, everyman, normal man, failure at so many things has rang true to almost ten thousand readers on the website, and now that it is in print form and on the Kindle, even more people are joining him on his lonely, savage journey.

Dark Recollections is Adrian's journal. In it, he tells you the reader how he survived the end of the world, and how he dodged the undead day after day to make some semblance of a life at his work, Auburn Lake Preparatory Academy. In Dark recollections you'll find brutally real survival, raw emotion, and the humor that can only come from a man that has nothing to lose.

Dark Recollections has over 60 five star reviews on Amazon, and that's just in the first few weeks of its listing there. It's more than just a book, it's a lifestyle. A mantra.

Zombie fiction doesn't get better than this book

Adrian Ring is one of the most "Gee, he's just like me" characters in modern fiction. And he kills zombies! What's not to like? AUD is not a Hollywood star dusted unrealistic ZA world. It is the world every John & Jane Doe on every street in every town will face in a Zombie apocalypse. Fair warning: Clear your calendar before you start reading because you won't want to put this book down.

you dont just read Adrian's Undead Diary ... you live it

i am not kidding. I first started reading AUD after the first season of The Walking Dead ended. I needed my zombie fix. yes, i'll admit it...my name is sherry and i am a zombieholic. anyway, when i found AUD, Chris had about 4 months posted. that first night, i read until i was seeing double. Chris's writing style, is so descriptive. When he describes the campus, you can actually see it in your mind. You can feel the fear, the anger, the pain that not only Adrian, but all of the characters in the book are experiencing. Chris is an artist. His words paint pictures in your mind. And in my humble opinion, that is why I call Adrian's Undead Diary a work of art. You will not be disappointed. You will be hooked by the end of chapter one! [by Sherry]

so addicting, it should be illegal

i kid you not, AUD followers would wait (sometimes impatiently) for each new entry. Chris would let us know when a new entry would be appearing and i used watch the 'members reading' count rise weekly. Adrian is the kind of character that once you started following his journey, you HAD to know what happened next. One of the features that I really love was the way that Chris would add side posts. for example, in Dark Recollections, there is a chapter about Phil. Adrian met Phil when all hell first breaks loose. and Chris took the time to follow through with Phil's story so that you aren't left hanging, wondering what happened to him. Chris would add these side stories and it alwways felt like an extra present. Chris Philbrook is one hell of a writer, you will not be disappointed with his wonderful series. [by Sherry]

Not only a zombie novel

This book is awesome, and believe me that awesome as been used so much lately in vain, this book truly is awesome. This is not only a zombie novel, it's a journey to another world, a world overtaken by the dead. A truly amazing history to read, sometimes so addictive that you genuinely lose time perception and hours will pass by once you are into it (first chapter already). Be prepared! I recommend it, as one of my favourites Sagas. [by Nahuel]

AUD is an epic story of a man's struggle to survive amid a zombie apocalypse. The protagonist Adrian Ring also struggles with his past decisions and himself while trying to survive in this new world. The story is intriguing and sucks you into the characters and setting of the story. [by Kirby Richard]