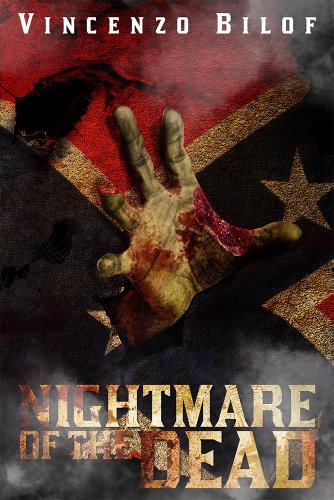 Book: Nightmare of the Dead - Rise of the Zombies by Vincenzo Bilof

about this book: While the American Civil War rages, a woman awakens on a train to find herself without any semblance of identity, and her world turns upside-down when she's attacked by nightmarish, flesh-hungry zombies. She takes on the identity of a famous outlaw, Neasa Bannan, and she learns that she's a pawn in a greater game. A group of benign assassins, The Nightmare Collective, is using her to help create the ultimate weapon that will allow the Confederacy to win the conflict.

Doctor Saul, Neasa's tormented,insane brother, has crafted the zombie menace to earn both the approval of his sick mother and the Nightmare Collective. As Neasa begins to learn that she has left a path of destruction and a heartbroken lover in her past, she decides she wants a better life for herself that is free from violence. However, Doctor Saul has other plans for her that will force her to choose between her life, and a world free from the undead monsters.

• What inspired you to write this book?
I was inspired by some very lucid dreams I've had, and I've always been an avid reader and lover of history. I thought the Civil War was the perfect backdrop for a serious horror novel, considering how brutal the conflict was.

• How did you come up with the title?
The book has a very dream-like quality to it. The protagonist, Neasa Bannan, has serious amnesia, and fragments of her identity are revealed to her through a series of nightmares.

• What was the hardest part of writing your book?
The most challenging part about this book was cutting some scenes from it that I considered to be far too brutal and explicit. I still want to reach a general audience, and the book is very gruesome as it is. Readers might wonder what could possibly be cut from the novel for being far too graphic, because the book is very uncensored. I wrestled with my vision for the novel, and finally decided that some of the material that might call down too much controversy wasn't necessary for the plot.

• Did you do research for your book? What did that involve?
I had to research Civil War weaponry to make sure that the setting remained accurate. I discovered that most of the weapons we've seen in Wild West or Civil War films are extremely unrealistic, as the weapons were hardly ever accurate, they produced a lot of smoke, and the majority of them didn't use "bullets" as we define them today. It's also unrealistic for a gunslinger to "fan the hammer," in which the shooter uses the palm of their hand to rapidly fire the gun.

• What do you want to say to your readers?
I hope that you enjoy books that are both disturbing and poetic!

• "A uniquely shocking, horrifying, and absorbing novel that will leave you wanting more."