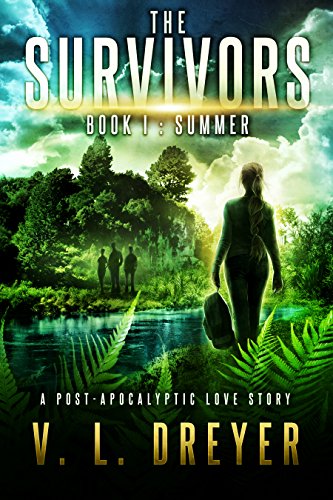 Book: The Survivors Book I - Summer by V. L. Dreyer

about this book: Hi everyone! My name is V. L. Dreyer, and I'm the author of "The Survivors" series. AskDavid.com has asked me to write something completely new for you, so I'm going to tell you a little bit about what inspired me to write it, rather than just talking to you about the story.

I'm a huge fan of the apocalyptic genre. I don't know what it is about watching people struggle for survival against the odds, but it really strikes a chord with me. Whether it's natural disasters, plagues or undead monsters, I love watching people fight for their lives.

Wow, that sounds bad, doesn't it?

Well, if you're reading this, you're probably a fellow fan of the genre and know what I mean. But, there is one thing I've noticed that always struck me as a little odd about the apocalyptic and post-apocalyptic genres. Almost all of them are about the events directly surrounding the fall of civilization, or they're set much, much later, after civilization has already had a chance to regrow into... well, something.

That's is where "The Survivors" takes place, in that middle bit, between the fall of humanity, and the rise of whatever comes next. Ten years before the book starts, a terrible plague ravaged humanity, killing most of the population or reducing them to (mostly) harmless wandering undead. A lucky few survived because of a natural genetic immunity, but the virus was airborne - the people that survive, the only advantage they had over everyone else was the genes.

They're an eclectic bunch. They're not all warriors and fighters - they're just people. Normal people. Doctors, teachers, a police officer, even some children. These are the survivors. These are the people that are left behind.

These are the people that must save humanity from the brink of extinction.