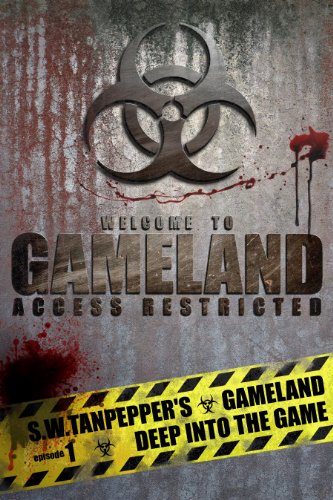 about this book: Without a doubt, the Undead—cold as they are—are hot commodities in science fiction right now. The popularity of Zombie Walks, often held in conjunction with apocalyptic conventions, is a testament of their allure. The Walking Dead series is hugely popular on television and zombie books are enjoying a wave of immense popularity. A quick internet search for "zombies," "undead," and "apocalypse" will bring up hundreds of pages of results, yielding dozens of places where zombie fans can hang out. The Undead have infiltrated our social consciousness.

GAMELAND is a new speculative fiction series, a mix of high tech and biotech, horror and mystery, it's an eight-part thriller that ties together societal, economic, ecological, technological and political issues and dumps them on a small band of young computer hackers who make the unwise decision to hack into a zombie wasteland-turned-gaming arcade.

• What the story is about

Long Island has been long abandoned to the Undead after an outbreak forced a rapid evacuation thirteen years earlier. The disease is tenuously managed and the Infected controlled by the mandatory implantation of neural devices in the uninfected living. Life expectancy is regulated and capped, and zombies are conscripted into civil and military service.

Along comes Arc Properties, a megalithic corporation with their hands in everything from biotech to high tech and the government. They've built a gaming arcade on Long Island called Gameland, where the rich and privileged get to "buy" zombie Players to act out their primal violent fantasies. Entertainment is big money, and nothing raises ratings better than violence. Jessie Daniels, a computer gamer and hacker, and her gang of jackers decide to break in. But once in, Arc doesn't want them to leave.

What ensues is a dark drama that will eventually be played out for the world to see, but for this band of second-class citizens, survival is the only thing that matters. In the course of trying to escape, they struggle against each other, against their inner demons, against ideologies and societal complacencies. They battle the natural environment and impact of human activity on it. And, of course, they battle the Undead. Yes, there is gore, but unlike most zombie survival stories, in this series physical horror isn't the focus. This is a story about people living in a world where values have all gone to whack and hope remains as the only currency left to spend.

• "The writing is crisp and clean; The characters complex; the plot well structured and paced." —CJ

• "Deep into the Game has a unique perspective -- written from the viewpoint of a gamer teenager -- that I found very refreshing." —Carly OConnor

• "As awesomely and beautifully horrific as the prequel was, this novel was action packed and fast." —T Dewhirst

• "I will say that once I started reading I raced thru this story in just two days." —David Dalton