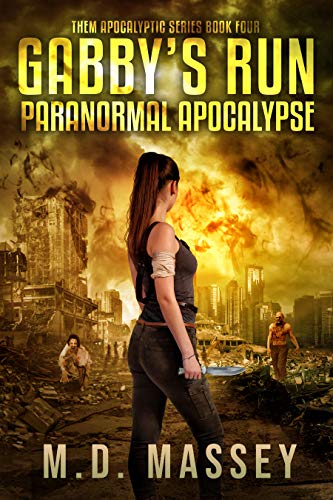 Book: THEM Gabby's Run - A Them Paranormal Post-Apocalyptic Novel by M.D. Massey

about this book: THEM: Gabby's Run focuses on Gabby Mendoza, a teen living in post-apocalyptic Texas who is not entirely human. Gabby has been raised by her uncle Tony, who is a little psychotic, and her adopted aunt, Captain Lorena Perez.

The book opens just prior to Gabby's initial meeting with Scratch Sullivan in Book One: Incursion. Gabby is helping her uncle investigate some werewolf activity while he tracks down Scratch. Unfortunately, they get sidetracked and Gabby soon ends up running for her life.

• What can you tell us about Gabby?
Well, Gabby is brave, resourceful, headstrong, and not to be trifled with. I like to think of her as being like Ellie from The Last of Us, but with superpowers. She's been altered genetically to help her survive in the harsh reality of the apocalypse, and that gives her a bit of an edge. But, she's still young and vulnerable.

• Who are the primary readers of this novel?
This novel has a lot more of a paranormal and urban fantasy influence than the last three novels in the series. Well, except maybe for Counteraction, which is where I really started delving into the paranormal and supernatural lore of the world of THEM.

And even though I didn't write it as such, it could be considered as YA fantasy, since the protagonist is a teenager. But pretty much anyone who loves zombie apocalypse novels or urban fantasy will enjoy this book.

• How did you come up with the title?
I have a theme for the book titles in the series that are told from Scratch's point of view. Aberration, Invasion, Incursion, Counteraction, and so on. I wanted to differentiate this installment from the other titles in the series, because it really does tell a lot of Gabby's story. For some reason, while I was writing this book I couldn't get that old dystopian TV show "Logan's Run" out of my head. Thus, Gabby's Run; I suppose it's derivative, but it works.

• Why did you choose this cover?
Again, I wanted to differentiate it from the other titles in this series. Also, I wanted the cover to have more of a paranormal, urban fantasy feel. I think that Christian, my cover artist, achieved that effect nicely.

• What was the hardest part of writing your book?
Writing authentic dialogue. It's tough to nail the voice of a teenage girl, especially one who has been raised in the apocalypse. Although I've worked with teenagers quite a lot in the past, it's been a while since I spent much time around teens. So, I spent hours at the local burger joint listening to high school kids chat while I was writing this book. It seems to have been time well spent, as reader feedback has been quite positive thus far.

• What other surprises are in store for readers in this volume of your paranormal apocalypse series?
Many readers will remember Captain Perez from the previous books. And while she's still in a supporting role in this book, you'll get to find out a little more about her and how she fits into the overall story.

And of course, you'll also be introduced to Gabby's mysterious Uncle Tony. I don't want to give too much away about him except to say that he's dangerous and ruthless, and probably not a very good influence on Gabby. He's not evil, per se; just a little off his rocker.

• What do you want to say to your readers?
Mostly that this book was a blast to write. In fact, I wrote it faster than any of the previous books in this series. I think that was mostly because I was itching to write a book from Gabby's point of view. To me, she's such a compelling character, and I thought she deserved her own novel. Hopefully, readers will be pleased with the result.