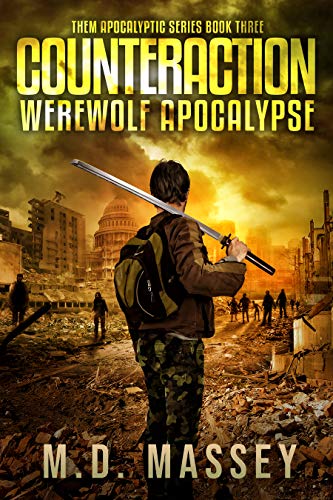 about this book: THEM: Counteraction closes a major story arc that had started in the previous book, Incursion. In it, Scratch is finally able to track down his girlfriend and confront the Corridor Pack, who have been causing him no small amount of grief. If I had to compare it to a movie I'd say it's a cross between The Searchers and The A-Team, but with werewolves, zombies, and vampires.

One thing readers will get from this book is a lot of entertainment value. For one, it's just as action-packed as the other novels in this series. The plot moves fast and it doesn't let up for all thirty-eight chapters. And, I introduce more oddball characters and bad guys in this book. So if you like that sort of thing, this book really delivers on the oddballery.

Finally, the plot plays to the iconic and heroic character of Scratch Sullivan. And not just the Rooster Cogburn/John McClane side of him; I'm also referring to the tragic, Homer-esque side as well. Scratch's life is a tragedy in every sense of the word. Yet he still soldiers on, despite his suffering.

But suffice it to say that in this book, his journey will tax him in every way possible, and that true grit of his is sorely tested.

• What inspired you to write this book?
There are a number of reasons why I wrote this series. For one, I wanted to write the sort of books that I like to read. I like action novels, and I like Westerns, and I like fantasy. So I thought, why not combine elements of each? It seems to have worked out well, better than I expected, in fact.

But also, I got tired of picking up urban fantasy novels that are obviously written for the romance audience. In my opinion, too many urban fantasy and paranormal novels are focused on romance these days. I mean, why does there always have to be a cute guy involved with the female protagonist? And can authors not write a strong female character who doesn't get all weak-kneed when she sees an attractive man? I know that sort of thing sells, and I get it, but I think female characters deserve a bit more respect than they're getting in urban fantasy today.

And don't get me started on the male characters who populate the pages of these novels. It's like they all drink soy lattes and shop at American Apparel. Let me just say that I haven't seen a lot of male protagonists in urban fantasy recently that I would want backing me up in a bar fight.

So, Scratch is sort of my answer to the gelding of the modern male protagonist.

• Who are the primary readers of your book?
Anyone who loves urban fantasy, paranormal fantasy, or zombie apocalypse novels.

Gender-wise, although I thought this series would appeal more to men than women, many of the readers who have shown the most support for this series are women. I think that's probably because Scratch has a very human and very tender side. He's not the type of guy who would make fun of someone because they're not "manly," but at the same time he is very much a man's man. He looks out for the people he cares for, and stands up for what he believes is right. I guess because he's both tough and tender-hearted, it makes him a likable figure.

Of course, I think the supporting cast also has a lot to do with how popular this series is among female readers. People almost always say they love Bobby, probably because he's so goofy. And Gabby is also a favorite among readers. Then you have all the oddball players like Wendigo Donnie and a few others you'll discover within the pages of this book.

I guess it all makes for a fun read, which was the best I could have hoped for when I wrote it.

• How long did it take to write it?
It was actually one of the more difficult books I've written. Not that my plots are complicated; they're about as straightforward as it gets. But, I had some issues with getting the characters from point A to point B, and I struggled with the ending.

Besides that, I started it and then realized I needed to write a prequel. So, I set it aside for a few months while I wrote Invasion. Overall, it took me eight months to write from start to finish.

• What was the hardest part of writing your book?
Making Scratch fail. I won't go into detail about how he fails or why, but making him suffer after he's already been through so much in the first two books… yeah, that was pretty difficult. But it also makes the book a lot more interesting.

• Did you do research for your book?
I had to do research on nuclear reactors, of all things. And although I doubt I got all the science and technical details right, I think I at least picked up enough to make it believable. That is, as believable as a paranormal post-apocalyptic zombie novel can get.

• Did you learn anything from writing your book and what was it?
I learned that sometimes stepping away from a novel for a week or two can result in a much better novel. For me at least, it's not always best to just hammer through sticking points when the plot just isn't working out. While working on this novel, I found out that if I just let my subconscious work on the story for a while, the plotting problems will resolve on their own.

• What do you want to say to your readers?
As always, that I write to entertain. I'm not trying to write the great American novel. I write pulp, and the purpose of pulp fiction has always been to entertain. So, I hope I've achieved what I set out to do, and that my readers are greatly entertained when they read my books.

Also, if you like it please leave a review for the book on Goodreads or Amazon. We indie writers live and die by the quality and quantity of our reviews, so if you enjoy a book be kind and take a few minutes to let others know what you think. Every positive review helps.