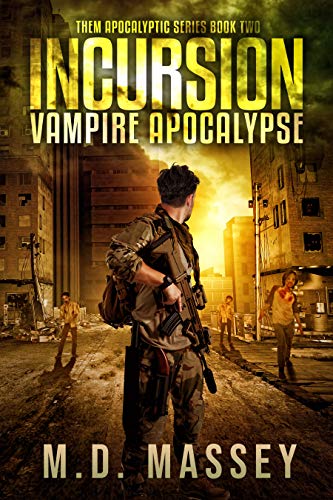 about this book: THEM: Incursion takes place about eight years after the prequel, Invasion. Scratch Sullivan is now a hardened and experienced "hunter" living in post-apocalyptic central Texas. A "hunter" is a sort of itinerant gun for hire, a trouble-shooter who takes care of problems with zombies and other nasties that your average rancher or settler is unable to deal with.

In Incursion, Scratch gets tipped off to a possible threat to the safe zones he protects. Since his on-again, off-again girlfriend Kara lives in one of these safe zones, he has more than just a professional interest in finding out if it's a legitimate threat. So, he takes off into the Outlands, which is sort of a no-man's land between the Badlands and the Safe Zones, to see if he can verify the danger.

• What should readers expect from this book?
Action. Lots and lots of action. I hate science fiction and fantasy books that claim to be action-packed that take forever to get going, or that have long periods with gobs of exposition and dialogue where absolutely nothing happens.

So, I tried to write this book and the other books in the series like an action movie. Fight scene, backstory, fight scene, dialogue, fight scene… you get the picture. Hopefully, readers will say that there's not a dull moment in the book. But if a reader happens to come to a boring spot in the book, they can rest assured that something exciting is going to happen within a few pages.

• What inspired you to write this book?
I love zombies. Zombie books, zombie movies, zombie TV shows, zompoc video games… I can't get enough of them. I guess there's something about surviving an apocalypse while facing the constant threat of imminent demise that fascinates me.

I also have a theory that almost everyone secretly wishes they had carte blanche to shoot their annoying neighbor or boss in the head with a crossbow. Or maybe it's just me. Anyway, I think there are a lot of people who find the concept of a zombie apocalypse to be appealing in a sort of Wild West fashion, because anything goes and you have to survive by your wits and grit.

In reality, I'm sure we'd all be crapping our pants and getting eaten. But it's fun to fantasize about it and run scenarios in your head.

• Is there anything unique or special about this novel?
This book was originally published as a serial. I wrote it in four parts as a novella series, and released a new episode every few months on the Kindle platform from August 2014 to May 2015. The reason I wrote it as a serial was because of some bad advice I got from a writer's group I belonged to at the time.

From a pure writing perspective, it really wasn't bad advice. It's easier for an inexperienced author to finish shorter works; at least I found it was easier. But from a marketing standpoint it wasn't the best decision. For one, fans in every genre have certain expectations, and in the zompoc genre readers expect full-length novels. So even though my reviews were mostly positive, the main complaint my early readers had about the series was that the episodes were too short.

And since most full-length indie novels are priced at $2.99 in the genre, it meant that I had to price my novellas at .99 cents to get them to move. You have to sell a lot of books at .99 cents to make a living as a writer. So, I decided to repackage the serial into a compilation, which was originally released in 2015 as "THEM: The Complete First Season."

• How did you come up with this cover?
I had a really amazing cover done for the original release of the compilation by a talented cover designer named Dean Samed, and I had the interior design done by Therin Knite at Knite and Day Designs. But, sales fell off even with the new cover art and interior treatment.

So, I decided to rebrand and relaunch the series this year in 2016 by releasing a prequel and a sequel and changing the cover art. Since Dean had announced that he wasn't doing cover art anymore, I found Christian Bentulan in a writer's group and worked closely with him on the current series covers and rebranding.

It turned out to be a good decision. Sales have been steady since I released the third book, Counteraction, and I expect they'll pick up even more when I release the fourth book, Gabby's Run.

• Is there anything you want readers to know about this book?
I have seven books planned in this series, with at least two spin-off series also planned that will feature characters from the supporting cast in these books. I just finished writing a book in this series from Gabby's point of view, and I have one planned for Bobby as well. So, there's plenty more action to come.

Also, even when I complete the planned seven books in this series it won't be the last you'll see of Scratch Sullivan. You can expect him to show up in the spin-offs, or perhaps even in future installments of the original storyline. There's an eight-year period between the prequel and this book, and that time period seems to just beg for new stories to be written. So, if fans want more Scratch, I'll keep writing stories about him till the cows come home.