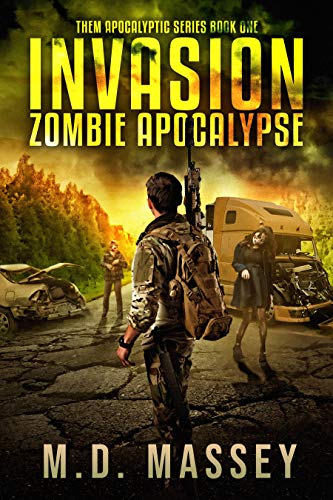 about this book: THEM: Invasion is a paranormal, post-apocalyptic action novel that takes place in the Texas Hill Country and Austin, Texas. The story follows the trials and exploits of one Aidan "Scratch" Sullivan, an injured Afghanistan war vet struggling with PTSD while he tries to adjust to civilian life.

Aidan's world tumbles headlong into a post-apocalyptic nightmare when a nuclear war triggers a zombie apocalypse. While no one really knows whether the zombie infestation was caused by a biological weapon or something else, it's painfully clear to Aidan that he needs to evacuate his aging parents from Austin before their home is overrun by the dead.

Unfortunately, Aidan is 170 miles from Austin and halfway across the state of Texas when he finds out about the zombie plague. The book follows him as he travels to Austin to save his parents, all while helping various people he comes across along the way.

• What will readers find inside THEM: Invasion?
Action… tons and tons of it. The book starts off quickly and never lets up until the last page. If you're a fan of action thriller novels, you'll enjoy this book.

And obviously, the book has elements of paranormal fantasy novels, urban fantasy, post-apocalyptic fiction, SHTF fiction, Western horror, and the zombie apocalypse genre. I don't want to reveal the plot, but the novel takes a few twists and turns and it crosses a few genre lines.

That being said, reader response has been very positive, especially among fans of zompoc fiction.

• How did you come up with the title?
I was looking for an overarching idea to tie together a post-apocalyptic book series that had been tumbling around in my head for a while. I didn't want to do the same old sci-fi based zombie plague thing, even though I love those books and can't get enough of them.

I hoped that having a sort of amorphous enemy lurking behind the scenes would add a creep factor to the books that I couldn't achieve with a science-fiction theme. It turns out I was right.

• How did you come up with the covers?
I have a background in graphic design, so I initially created my own covers. However, I'm not skilled enough with graphics of that nature to create the covers I wanted. So, I requisitioned a very talented cover designer to create a cover for a compilation of the first books I released in the series. Those books were released as serial novels and now comprise the second book in the series, "Incursion."

However, after I got that cover made my cover designer announced that he was going to stop doing commercial covers. So, I found Christian Bentulan in a writer's group on Facebook, and I worked very closely with him to create the look and feel of the current series covers.

He did a great job of creating the type of cover I had in mind, which had to be sort of a cross between post-apocalyptic and urban fantasy. That being said, I'm constantly refining the brand that these books represent, so don't be surprised if I update the covers in the near future.

• Did you do research for your book?
Some. The research I did was mostly related to the effects of nuclear war and how that might impact survivors in the time immediately following a nuclear holocaust, and in the years to follow.

As far as the geography and people were concerned, I live in the Texas Hill Country so I'm very familiar with the area and people. It was actually a lot of fun to write a book series in the area that I've come to call home.

• What was the hardest part about writing your book?
Writing believable characters. It's easy to turn your characters into infallible and unflappable heroes who have an answer for everything and who always come out on top. In fact, I think that's a common flaw in many post-apocalyptic fiction novels.

For the main character, Scratch, what I really wanted to show was that just because someone has specialized training, it doesn't make them superhuman or invincible. Scratch tends to get beat up, he sometimes underestimates the threat he's facing, and he worries about all sorts of things, and especially about the people around him.

I believe that showing that human side of my protagonists helps my readers connect with them. I read a lot of books, and for me at least there's nothing that makes me like a character more than seeing them struggle while still trying to do the right thing.

Of course, a little moral ambiguity never hurts either. I try to throw that wrench in the gears every so often as well.

• Is there anything you want your readers to know?
Mostly I want them to know that I write to entertain. I'm very fond of saying that I write pulp; I'm quite proud of it, in fact. I grew up reading the great pulp fiction writers, including Lester Dent, Robert E. Howard, and Edgar Rice Burroughs. In addition, I've always been fascinated by the works of classic horror authors like Lovecraft, Shelley, and Poe.

And while I don't believe that my work can be compared to that of those great authors, hopefully at least my readers can see the influence they've had on my novels. Failing that, I hope my readers will enjoy the world and characters I've created. If I get that right, then I've succeeded at what I set out to do as an author.