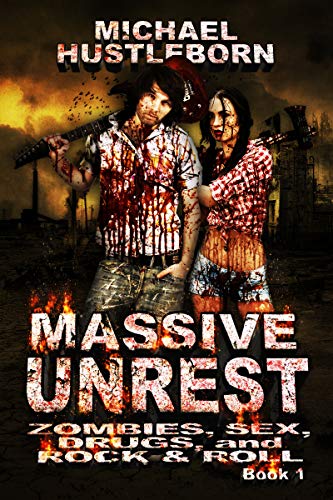 about this book: Johnny, an American living in Germany, dreams of making it big in the music business. When a popular talent show goes international in its search for the next big star, he seizes his chance and kills it. Unfortunately, someone else decided to kill the world and as Johnny floats on cloud nine, people start dying droves. If that wasn't bad enough, they're not staying dead and Johnny is the farthest thing from a doomsday prepper as anyone can get.

While Johnny and his new friend Lena are sent scrambling for safety, the madman who released the virus is still out there and he has a few more dirty deeds up his sleeve. As everyone scrambles to find a place that is defensible against massive hordes of undead, worlds collide and tale of lust, betrayal, zombies, sex, drugs and rock-n-roll is born. Now there is only one thing left to do, survive.

Massive Unrest is a fun, face paced post-Apocalyptic thriller and one hell of a ride!