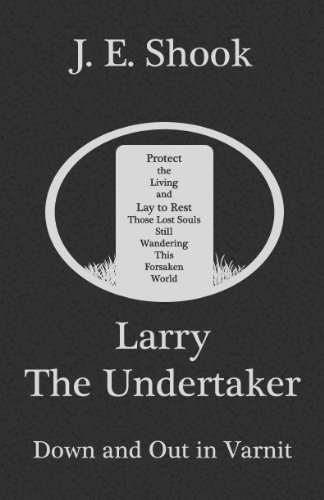 Book: Down and Out in Varnit (Larry the Undertaker) by J.E. Shook

about this book: This is the story of a man named Larry who has been plagued for years from his fear of zombies. At an early age he was forced to survive on his own. His rough look and unsociable attitude, along with unfortunate circumstances have kept others away from him. The story starts in a small frontier town named Varnit, where Larry has been living for a couple years. A lone woman named Hildegard Smith comes across him and forces him to slowly change the way that he sees the world as she begins to escort him back to her home city of Memphis. The story takes place in the real world far into the future, where zombies have brought civilization to its knees.

Due to the strength and determination of an elite group of warriors known as Undertakers, humanity has managed to push the zombies back and have been able to restore several of the cities into habitable places for people to survive and thrive. Though the zombies seem to close to annihilation, the Undertakers remain vigilant until they are certain humanity is safe. The first book starts at a personal level with Larry struggling to survive on his trip to Memphis, though as the series builds, Larry will have a huge role to play in the future of the human race. Though this would be considered horror due to the zombies, I believe that many who like science fiction and fantasy can enjoy the series.