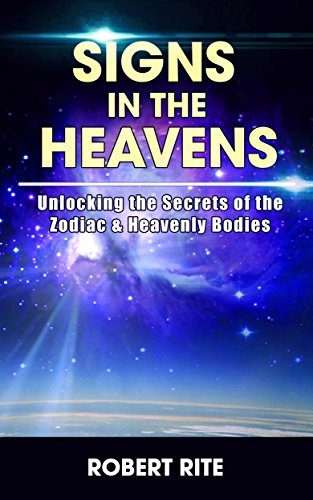 Book: Signs in the Heavens - Divine Secrets of the Zodiac & the Blood Moons of 2014 (Supernatural) by Robert Rite

about this book: Is the history of this age written in the heavens?

Will the coming series of Lunar Eclipses (blood moons) signal the beginning of the Apocalypse?

Are the Zodiac signs a fabrication of mankind - or signs from the creator?

Are the end of day prophecies already revealed in the heavens, and by the coming Blood Red Moons of 2014 and 2015?

This and much more is revealed in my latest book; including:

Upon reading this book you will never look at the heavens again in the same manner. You will learn that there is much more to the heavenly bodies and constellations then what astrologers and their myths want you to think!

I will all but prove to you that the constellations (Zodiac signs) were planted in the heavens for signs and that they unlock several incredible mysteries.

They reveal to us the history of mankind, and the outcome of the cosmic battle between good and evil.

In this book, I will unlock many great mysteries for you. Join me as we span the universe and unlock the many mysteries in the heavens.

Other books by Robert Rite (more)