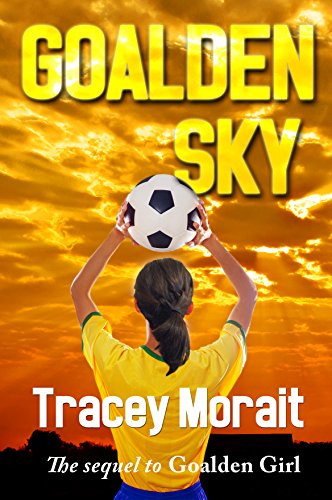 about this book: Goalden Sky is my fifth self-published book, the first sequel to Goalden Girl, and was released in September 2014. It continues the adventures of promising young footballer Gemma Sutherland and her family and friends. In Goalden Sky, Gemma is a year older, but the prequel was published seven years ago in 2007! I had always wanted to write a sequel, but my other books got in the way. A second sequel will follow eventually, although I don't have a title yet.

In this story, Gemma has her dad back to herself again following the breakup of his second marriage to Gemma's loathsome stepmother, Shelley, whose personality changed dramatically following the loss of their baby. Gemma is happy, until her dad insists she has to put her school and club football on the back burner while she studies for her GCSE mock exams. This goes down badly with Gemma, and worse still, Shelley's young daughter, ten-year-old Portia, has come back to live with the Sutherlands because Shelley is too depressed to take care of her properly. Physically, Portia has changed: she has lost a lot of weight with the help of dieticians and her bulimia problems are firmly behind her, but as far as Gemma is concerned she's still an obnoxious, spoilt little brat. Even Portia's cousin Tyrone Collins – who is now one of Gemma's best friends – finds Portia a little nuisance. Portia, on the other hand, looks up to Gemma and wants to be a footballer, too. She's anxious to break into her school team, and when she is selected to be a substitute for an upcoming match, she wants Gemma to watch her play, but Gemma opts to go out with her old friend Becca instead.

Then the Sutherlands' world is turned upside down when Portia is seriously injured on the way back from the match. Suddenly she is dependent on Gemma and her dad, she loses interest in football and life, and it's all that Gemma and her mates Tyrone and Daz can do to get her back on track. On the plus side for Gemma, Portia's predicament makes her dad relent about Gemma playing football. He tells her that life is too short and she should follow her dreams.

I chose the title Goalden Sky ('Goal' to reflect the football angle again) because there is a line in the well-known song You'll Never Walk Alone (from the musical Carousel), an anthem adopted by football fans around the world, particularly by my club Liverpool FC, '...at the end of the storm is a golden sky...' Portia is being tossed and blown in a storm and I am taking the reader through a journey to see if she can reach her golden sky. This is reflected in the cover.

As my characters had already been formed in Goalden Girl, and I was writing about a favourite topic, I found Goalden Sky easier and quicker to write than Big Brother and Epiworld; it took me just less than a year, though as with Goalden Girl I had to make sure I got my football scenes correct again, so some research was required. It was a difficult decision to put the book in the young adult age category (12+) rather than children's fiction, but I felt it was the right thing to do as Gemma and her friends are older and personal relationships are starting to come into play.