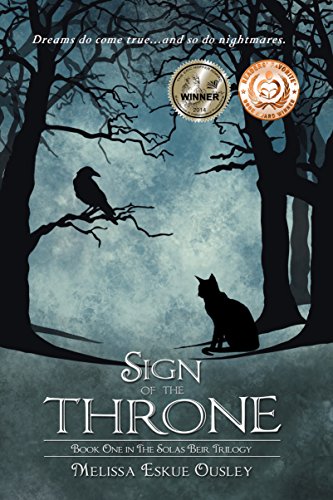 Book: Sign of the Throne (The Solas Beir Trilogy 1) by Melissa Eskue Ousley

about this book: Abigail Brown is a girl haunted by dreams of an ivory castle, blood-thirsty monsters, and a striking stranger. When Abby encounters David, the doppelgänger of the mysterious young man in her dreams, she realizes her nightmares come true. Braving the attacks of shape-shifting bogeymen, Abby and David must find a way to save a magical realm, and all of humanity, even if it means losing each other.

I am a former educator with a background in psychology, and I wanted to create a smart book for the young adult audience that combines psychological concepts and legends in a fantasy story with adventure, romance, humor, and an insidious evil hidden in plain view. "Sign of the Throne" is filled with mythological creatures and political intrigue. It's a modern fairy tale featuring strong female characters both as heroes and villains.

My interests in psychology and mythology influence my writing. When you start looking at the mythology of different cultures, you see similarities, not only in archetypes, but also in legends about mythical creatures. Certainly humans in different parts of the world share similar fears, and it makes sense that our bogeymen resemble dark, shadowy creatures that come in the night to steal us away. But I'm also fascinated by tales of other creatures, like mermaids for example. There are mermaid stories from all over the world—from the selkies of Ireland to the mermaids of Puerto Rico and Thailand. Psychology also influences my writing in the development of characters and themes, and through the inclusion of various concepts such as probability and synchronicity. I also like symbolism. Some, but not all, of my characters' names have a symbolic meaning.

Video: Sign of the Throne by Melissa Eskue Ousley