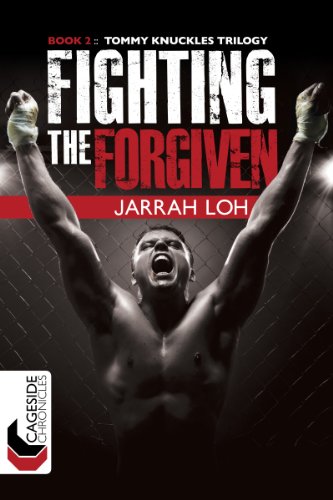 about this book: Read the exciting follow up to Jarrah Loh's acclaimed novel Fighting the Storm.

The adventure continues in the second book of the Cagesdie Chronicles series, Fighting the Forgiven, as Tommy Knuckles travels to the beautiful country of Brazil to go up against what could turn out to be his greatest ever opponent, Diego Silva.

But Tommy discovers more than just an opponent in South America, as he unravels the secrets behind his trainer's past and finds himself in the middle of a century-old family rivalry. But among the foreign language, and Jiu-Jitsu training mats all around him, Tommy finds friendship in the chubby, American boy, Jonas. With the two of them loose on the streets of Rio De Janeiro, will Tommy even get the chance to fight his new arch rival in the cage? Or will the streets of Rio eat him up in its girls, nightlife and violence?

Action and adventure awaits in the most exciting Cageside Chronicles novel yet!

Check it out now!