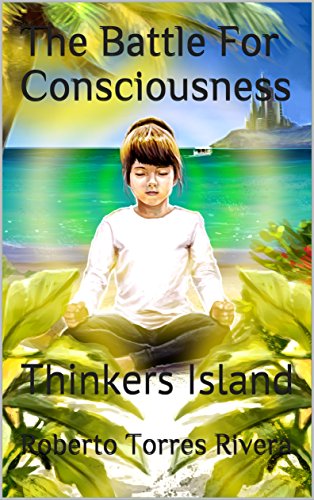 Book: A Messiahs Battle For The Human Realm - To think freely, or have thought implanted, These are the choices (The Battle for consciousness Book 1) by Roberto Torres Rivera

about this book: This is the first of a trilogy introducing a highly enlightened being in the form of a seven-year-old girl by the name of Ashar. With a mission to cure the human mind of a virus introduced by an evil society known as the Controllers, she enlists the help of an entire island that is unchartered and secret to the rest of the world. In order to carry out her plan, she lures a young engineer by the mane of John Christopher to this secret place known as Thinkers Island and hones him into becoming a skilled agent ready to confront these Controllers. Johns mission is to save the specially gifted children from being hunted and killed in the Controllers attempt to find and destroy Ashar. These controllers know that a person born within the last ten years was there to destroy them and stop their dominion over the human mind.

Written for young adults it is easy to read and introduces futuristic technologies as well as philosophical and metaphysical thoughts.