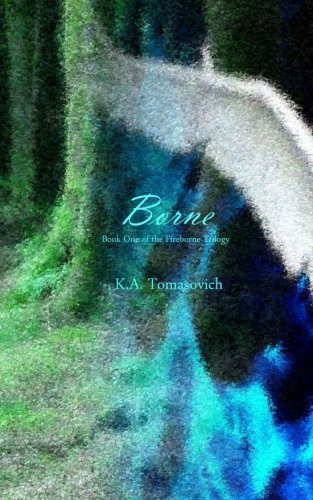 about this book: Hello! My book, Borne, is a YA paranormal adapted from a Russian fairy tale. I was inspired to write it after working at a boarding school in the Alaskan Bush. The high school students I worked with were constantly reading, and I began borrowing their books. I really enjoyed reading YA, especially those with paranormal or fantasy elements. I noticed, however, that many of these books were based on the same kind of mythology, folklore, and archetypes. I decided that I wanted to try writing one of my own, but this time using lesser known myths and legends, specifically those of Slavic or Russian origin. That is how Borne came about, though it changed quite a bit from my original idea by the time it was finished.

The story that unfolds in Borne is about a fifteen-year-old girl named Marija (pronounced Maria), who leaves California with her brother when their parents die, to live with their new guardian, their formidable grandmother, Dragana. It becomes apparent right from the get go that Dragana has secrets, and Marija's curiousity leads her dig at those secrets until they come to light. What she finds is that she is not quite human and that her very existence is endangered by that fact.

What I probably learned most from writing Maya's story, is that characters have a mind of their own. When I tried to push her in one direction, she would push back and go the way SHE wanted to go. Perhaps its just her stubborn nature!