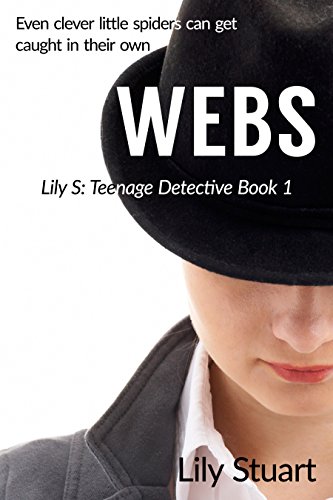 Book: Webs - Even clever little spiders can get caught in their own webs... by Lily Stuart

about this book: Webs opens with teenager, LILY, facing a gun just before it is fired at her. The story then picks up with her attacker's account of the events leading on from this and LILY'S diary recounting events leading up to it, starting three months earlier. The two narratives gradually converge.

Alongside her own life and problems – her best friend MELEZZ, and her unreliability, her arch-rival for heartthrob, MATT'S, attentions – JAS, and her bitchery, and school with its academic impossibilities and ridiculous characters, Lily's irreverent teenager's diary tells of her mother's foray into the world of internet dating and how it leads LILY to uncover a murderer. Told in turn by LILY and the anonymous murderer – her attacker from the opening scene, their combined story examines different perceptions of love, obsession and relationships, and between them they tell the story of The Russian roulette murder.

Sounds like serious stuff? Not when you meet Lily's friends and the antics they get up to, or are treated to Lily's witty and sometimes sarcastic take on life, love and being a teenager.

I first started writing Webs about 4 years ago, so it's been a long journey to here. It's undergone several transformations along the way, having started out as a very dark adult psychological thriller. Lily, the teenage detective, only had a bit part as the girl caught in the crossfire to begin with but as I got more and more positive feedback about how she made the story come alive, I realised that Lily shouldn't have the supporting role, but the star's. A comment by the eloquent and incredible P.D. James at a writer's group event convinced me that Lily's star role should be as teen detective. Lily became the Nancy Drew of today, and brings with her all the minutiae of a teenager's life in our brash and confusing modern world as well as a sharp mind and her own special formula for cracking clues. Lily is sixteen, irreverent, blunt, sarcastic, funny and vulnerable – like most teenagers. She's part imagination and part composite of what I've observed over the years as a teacher and mentor.

For me as a writer, it's been a wonderful exercise in getting into character – after all, I'm not sixteen, not a teenage detective, and have rather a lot more of life to look back on than Lily and her friends. But looking at anything with fresh eyes is the most amazing and intriguing way to see life. So much so, Lily S: Teenage Detective is now a series, with the second book, Magpies, now up on Amazon for pre-order.

And I'm lucky to have the advantage of two extremely critical reviewers for the series – my twenty year old and fifteen year old daughters, who are still laughing at some of Lily's observations on life! So are some of the reviewers:

• "I fell in love with Lily, her humor and snarkiness - and her bravery."

• "… with a mystery right from the get-go, you get a novel that young adults and adults like me will both enjoy it immensely."

• "I really enjoyed the diary-style writing and thought Lily's diary was extremely funny and witty."

• "What I like is the language and wit that is written in the characters personalities."

• "Lily was an awesome character and I was hooked!"

Video: Webs - Even clever little spiders can get caught in their own webs... by Lily Stuart