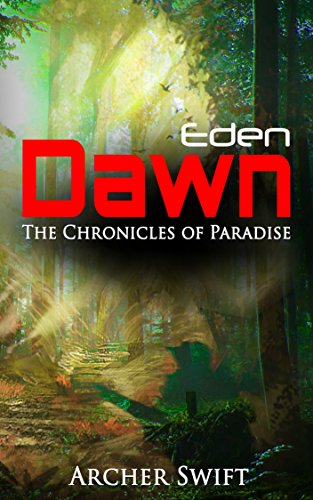 about this book: As a freelance writer, I was working on a serious piece of nonfiction late one night, and desperately needed a break to clear my head. In a moment of inspiration, I wrote the first chapter of Eden, Dawn. I had no idea where the tale would lead, but I immediately became engrossed in the protagonist's plight. A week later, I had finished the entire first draft, and by the end of the second week, I had mapped out Noon and Dusk (Books II & III) in what I envisaged would be a trilogy. I think I finished the non-fictional article I was working on. Or at least, I haven't had a client breathing down my neck about missing the deadline. (Is that a good sign or not?)

Being a perfectionist, another fourteen months passed before Eden, Dawn was complete. While the initial story line remained untouched, both minor tweaks and a major shift were made (with the help of an editor). For instance, the content of that first chapter, written in coffee-fueled inspiration through red-rimmed eyes, was fleshed out and spread into the prologue and chapters one and two. However, the big shift in thinking was to ditch the idea of a short, punchy 60,000 word tale (with minor description of the planet Eden, and its unique fauna and flora), into a strong, engaging 95,000 word novel, bleeding captivating description into the story line—which, from initial reviews, has turned out to be a successful choice.

Here are a few snippets from reviewers:

• "The drama is fast-paced, almost relentless at times, yet Archer bleeds in back story and description with carefully chosen flashbacks and by crafting an intense, deep-thinking protagonist, who is both likable and real. Unassuming and shy, Ristan Abel's reluctant courage is endearing and will have every reader cheering him on."

• "I couldn't put it down. Lost sleep. This is a lovely morality tale and coming of age book wrapped up in a sci-fi/fantasy package."

• "Eden, Dawn intertwines in just enough background information, while still dwelling on the present. The dangers are many on this planet … and I felt as if I was pulled into a completely different world…"

• "The pages were moving so fast in anticipation of the next chapter, I could barely keep up; awesome … is the true word to describe it. Thumbs up to Archer Swift for such a mind blowing read…"

If you're looking for a gripping page-turner about reluctant bravery set on a far-flung planet post-Earth, you'll enjoy Eden, Dawn.

Hooked from the opening page

Eden, Dawn hooked me in from the start, took me on a breath-taking ride and left me short of breath in a thrilling, if not perplexing, conclusion. A well-written, intense, and enthralling read, it had everything I look for in a book. Glad there are two more to come in the series! [by Rachel]

Eden, Dawn is a well-written, highly engaging thriller with lots of soul. It's set in a dark and brooding context, yet the story is real, inspirational and hopeful. I identified with the lead character in a harrowing way, and felt drawn into his life-and-death struggle. Cheering him on to a climatic conclusion, I can't wait for the next installment. I recommend it to all sci-fi and young-adult fiction fans. [by Dale]