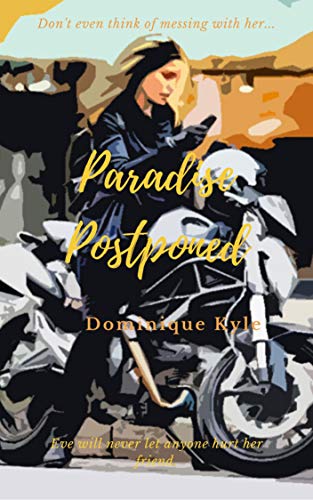 Book: Paradise Postponed (Not Quite Eden Book 2) by Dominique Kyle

about this book: At school, Eve had a reputation for being fearless, so when her Muslim friend, Nasim, runs away from home when her parents find out about her Indian Hindu boyfriend Rajesh, she turns to Eve to shield her. Nasim's menfolk are less than impressed by this turn of events, and are issuing increasingly violent threats. Rajesh isn't at all sure that Nasim's older brother, Tariq, might not turn out to be the 'honour killing' type, and Rajesh's family - who he'd always considered very open-minded about inter-racial relationships - are mysteriously dead-set against him marrying Nasim. So he too, turns to Eve to help him sort things out. But Eve has her own problems at the moment, and she wants to live a little. When she discovers Oval Stock Car racing her heart begins to pound! This is the excitement that she's always been looking for, but never knew existed! But how can she muscle in on the action when she doesn't have any money or contacts in the sport? And that infuriating Adam Quinn has already got his foot in the door and his hands on a wheel...

When I first heard someone describing the magic of Stock Car racing, the excitement, the fumes in the air so thick you wonder if you can get drunk on them, the thrill of the pits with the sparks of the last-minute welding flying up into the dark air, I knew it was tailor made for my young female car mechanic, Eve McGinty. And then I discovered the disgraceful fact that THERE HAS NEVER BEEN A FEMALE STOCKS CHAMPION. And I thought - Well I know one girl who can sort THAT situation out! Eve doesn't see why the men should have all the fun, and she's determined to shatter that glass ceiling. But first she has to get herself access to a car...

My family was quite bewildered when I suddenly started watching wacky races cars going round and round in circles for hours on end - but personally, I've never looked back!