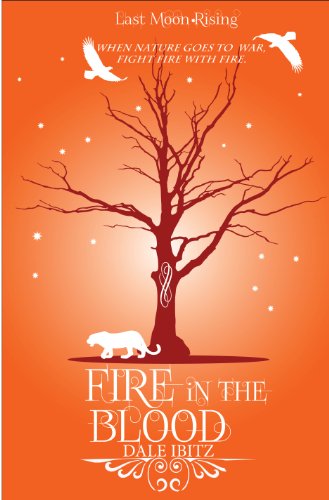 about this book: 17 year-old Haley is tumbled from Earth to Eyidora, a globe in the planetary chain that controls the weather. Haley finds herself immersed in a battle between the Eyids, the gods of nature, resulting in destructive weather on all globes in the planetary chain. Haley discovers she's descendant of the Air Eyid and holds the key to stopping the war and re-balancing nature on all the globes. But the Eyid War isn't the only challenge Haley faces; a descendant of the Fire Eyid wants to take control of the weather, and Eyidora, and make himself a god. Problem? He wants to make Haley his queen, wipe the globe clean of every living creature, and start a new race.

I chose this cover because I wanted to show the elements most prominent in the book: wind and fire. A tornado in a firestorm was perfect.

Fire in the Blood, first in the Last Moon Rising series, has a little bit of everything: action, romance, greed, and lust.