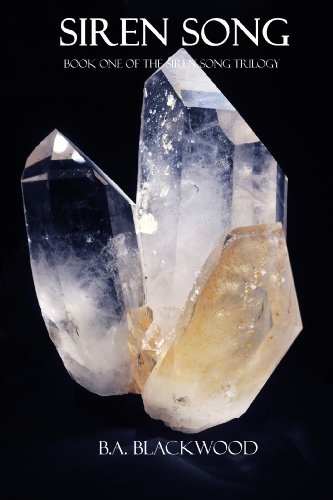 Book: Siren Song - Book One of the Siren Song Trilogy by B.A. Blackwood

about this book: When word nerd ARIEL receives the glossy brochure from Montana State University inviting her to apply, she feels like a lifer who's been granted a governor's pardon. After all, being a tomboy forced to attend every charity event in Dallas from "Save the Monarch Butterflies" to "Dare to Care – Stop Designer Pet Breeding" and wearing dresses (usually pink, always poofy) ordained by She Who Shall Be obeyed, aka "mom", is almost the same as serving a jail sentence, right? Ariel jumps at the chance, and takes her height-challenged self along with her favorite trunk of books to Bozeman, Montana, ready to find a place she can finally fit in. After all, apart from not knowing anyone and the cold-enough-to-build-an-igloo winters, what could possibly be the downside?

Plenty. Two battling factions of the Fallen Angels (yeah, THOSE Fallen Angels, the ones who were kicked out of heaven for doing really, really bad things) think Ariel's mother stole the Piece of Home, a mysterious object lost when they were evicted from the big mansion in the sky, and which will determine who wins their war. Ariel learns the hard way that these angels are nothing like the halo-wearing benevolent beings depicted in her childhood Bible. Nope, they fall in love, cheat on their girlfriends, and treat lying, stealing, and even murder as perfectly acceptable ways to get what they want, and what they want is for Ariel to cough up the Piece of Home - pronto.

One side swears it can be trusted, and seals the deal by providing Ariel with both a bodyguard who can turn Ariel into silly putty with a single glance and a fatherly confidant who holds out the promise of a family she can finally fit into. As Ariel races to find the Piece of Home, she uncovers chilling secrets about her parents that she'd give anything to unlearn, and discovers that no one can be trusted, not even those who claim to be protecting her.

Siren Song grew out of my musings about what would happen if Professor Dumbledore had invited a student to Hogwarts who turned out to have not a drop of wizarding blood in him and no ability to learn any magical skills. The idea morphed into a normal college freshman bedeviled by fallen angels who insist that she has something of theirs when all her life experience tells her they have the wrong girl. Siren Song is Twilight meets The Hobbit starring a self-reliant heroine with a sense of humor and a serious word fetish determined to survive in an increasingly supernatural world.