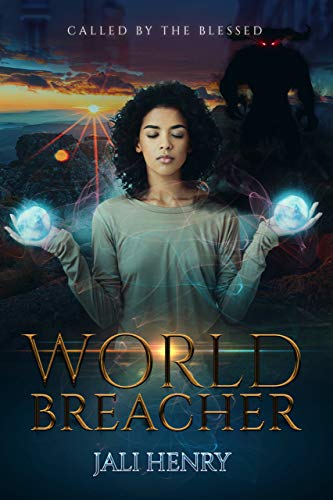 Book: World Breacher - Called by the Blessed by Jali Henry

about this book: Would you risk an eternity in hell and losing your immortal soul to protect those you love?

Impoverished teenage orphan Naledi struggles to raise her younger sisters in rural Lesotho, Africa. Her life is a daily struggle but when she manifests the rare ability to open portals through time and space, her life gets a whole lot more complicated. A devout Christian, Naledi worries that learning to harness her powers will land her in Hell.

Her worries become amplified when a couple of archangels want Naledi to use her powers to spy on hell and stop a demon Armageddon. She worries about how severe the repercussions will be if she gets caught and also isn't allowed to share her worries with her friends as she must keep it secret.

If she fails, her sisters will die, demons will take over the world and she'll get trapped in hell for eternity.

This book deals with the issue of how vulnerable teenagers are to exploitation by adults in a unique way. In addition to focusing on the protagonist, Naledi, the readers is led into the world of parallel teenage protagonist, Giada and how she copes as a newly-damned soul in Hell. The book includes humour, suspense, romance and social realism in addition to asking deeper questions such as 'is Hell forever?' and 'is it possible for damned souls to get redemption?' Major themes of the book include: mental illness, redemption, poverty, coming of age, abandonment, co-dependency.

I was inspired to write this book due to my desire, as a reader, to see stories which included more diverse protagonists from other parts of the world. I wanted the protagonist in my story to be a poor African as I don't feel there are enough stories representing those types of people, especially within fantasy. My grandmother was from Lesotho and I have spent time there hence I am knowledgeable about the culture.

The book is Young Adult but I believe can be equally enjoyed by adults.

I invite readers to step into my unique world. A richly layered, intricately built world which is unlike any you will have read before.