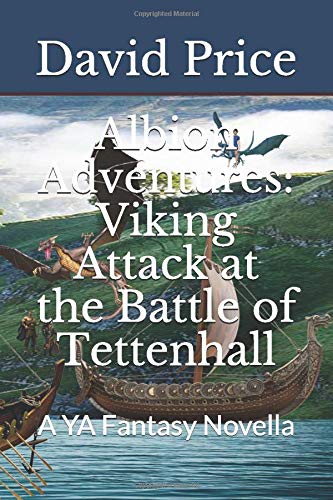 Book: Albion Adventures - Viking Attack at the Battle of Tettenhall - A YA Fantasy Novella - Book 2 Part of the series 'The Mystical Domain of Albion' by David John Price

about this book: This book is in the genre YA Fantasy, it should appeal to young adults in the age range 14 to 18+. It is the second and final book in the series 'The Mystical Domain of Albion' (Book 1). The first book covered the life of Geoffrey Hardaker, a retired watchmaker living in Birmingham in 2038, whiling away his retirement playing computer games with his much-modified robot care unit, called Dom. His security benefits have been reduced and he has been threatened with the Council taking his robot away. He is a troubled man, and to add to his troubles, he can't sleep and keeps having dreams about traveling to Cornwall to find a portal to an alternate dimension. He finds out that the dreams come from Merlin the Wizard and his King Artorius who need him to plan strategies and build weapons to help Albion in a war with the Celts, the time period in that other dimension is currently the 6th Century. The second book takes up the story, Geoffrey's age has been reversed by the Three Fates, he now has a young wife of 35 and wants to build prototype gyroplanes, as he is now a rich man, courtesy of King Artorius. Gwendolyn, his wife soon has a child whom they name Michael, who will eventually team up with his father, to fly these new aircraft, with the dragons (that featured in the first story) to harass the Viking army heading for Tettenhall, in the then Mercia location where a historic battle was mentioned in the Anglo-Saxon Chronicles. Whilst in the process of publishing that first book, I committed myself to writing a sequel. I liked the 40,000 word length of a novella, rather than a novel. It has proved more difficult however, in researching the history of a real battle that took place near my former home in Wolverhampton (Tettenhall is near Wolverhampton, or was then). It took about a year to write and format and I followed this up with detailed proofreading. This was not my original title, there were problems to get it to fit in the heading on each page, also Kindle Direct kept saying it was not clear it was part of a series. I've had to spell it out in an inner cover. I planned the book to include all the themes that attract the younger reader, battles, dragons, magic, supernatural, technology, fairy people, a little romance, music, genuine foods eaten & dressing fashions at the time and time travel by virtue of the 'disjointed realities' phenomena (SF in other words). I did much research about the time of Alfred the Great and his son Edward the Elder and theorised on how the Vikings traveled to the Midlands in the UK. I realised it takes a great deal of effort to produce a well thought out, quality book, that is enthralling and interesting to read equally by young and old..