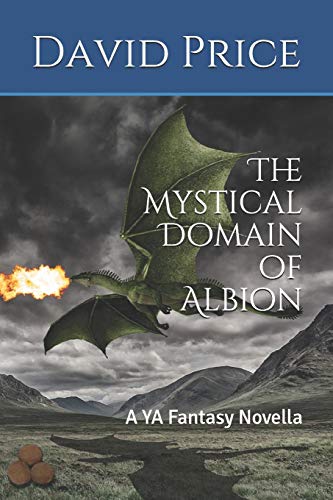 Book: The Mystical Domain of Albion - A YA Fantasy Novella (Adventures in Albion) by David J. Price

about this book: My book is a YA Fantasy written in novella format, it is an Arthurian type story set in 6th Century England, but this world of Albion is located in an alternate dimension that can only be reached by going through a portal, set in a magical waterfall in Cornwall and even then; only in the early hours of the dawning Summer Solstice. This book returns to my roots as my first book was a YA fantasy - my three intervening books were Science Fiction. This book appeals to the age range 11-17 but then everyone knows adults read such books for escapism. I put together all the elements that appeal to juveniles, a battle with Knights in armour, dragons, (elves, fairies, sprites, hybrid creatures, demons, and Monsters - 50% of the population is made up of the latter creatures living side by side with humans). Albion has science intertwined with magic and periodically has disjointed realities that can locate the world in different decades and climates not even following on in sequence. Against this background, Geoffrey Hardacker a retired watchmaker and his robot care unit Dom have to reinvent war weapons far beyond the science of the sixth century, based on Geoffrey's fallible memory of how they worked and plan a battle strategy of playing computer war games with his robot companion and the rag-tag army he has to assemble to win a victory for King Artorius against Celtic Wizards, that can throw fireballs down from the heavens. It was an enjoyable book to write, characters came to me quite naturally and there were many of them as their occupations fitted naturally into place. The book took me about 6-7 months to write. Much research along the way had to be done authenticating period dress, what they ate, types of entertainment and humor, the extent of their science in metallurgy, producing hydrogen gas, dances at a social gathering, etc., and oh yes a developing romance. If anything the book is enjoyable to read and has promoted a desire in me to write a sequel. I had envisaged the book cover and created it in Photoshop before drafting out the characters and course of the battle at its height. This is what made it easier to write for me, far better than the deep research I have to do in creating works of science fiction and hopefully a completed project that will sell well.