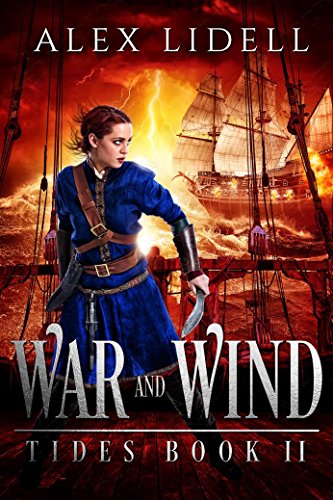 about this book: Master and Commander meets Sarah J Maas in a seafaring adventure of duty, love, magic, and a princess's quest to protect her kingdom on her own terms.

Slowly, relentlessly, Nile is being backed into a corner, dangerously close to breaking under the strain of hiding all her secrets – her increasingly volatile air caller Gift, her true identity, and her deepening connection to Domenic.

Domenic's refusal to defy the cowardly Captain Rima vibrates between them like a cutlass speared into the deck – until Nile learns just how traitorous Rima is.

When the shifting tide of war suddenly turns Aurora's backwater outpost into a vital battleground, Nile faces an impossible choice between duty and freedom. In a cascade of violence, gunpowder, and lies, Nile will soon discover who has her back and who wants to stab a dagger in it. To save the ones she loves, Nile may have to sacrifice everything.

WAR AND WIND is the exciting sequel to AIR AND ASH, a seafaring adventure of duty, love, magic, and a princess's quest to protect her kingdom on her own terms. Recommended for fans of Sarah J. Maas, Tamora Pierce, and David Weber.