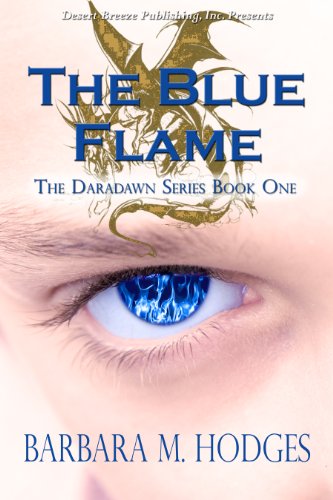 about this book: The Blue Flame is the first book in Daradawn, my young adult fantasy series.

Regan Kelsey believes her sister Kelsey is dead. Her sister took a job in Africa and disappeared into the jungle. In truth Kelsey went through a rift into the world of Daradawn. There she became involved with their struggle against the Blood Mage, Dirkk.

The rift between the worlds opens once every seven years and is open for only seven days.

The rift is again open. Those in Daradawn are losing their battle against evil and Kelsey sends High Mage Peter to bring Regan to her. Regan is marked with the blue flame, the same as Mage Peter. The blue flame is the mark the Power gives to its chosen, and those with it are strong in magic.

Of course Regan thinks Peter's story is crazy, but he has with him their grandmother's pendent. She agrees to accompany Peter.

In Daradawn Regan must learn to control the power within her before she can help those of Daradawn defeat Dirkk.

The Blue Flame is full of magic, danger, and adventure.

It is written for ages thirteen and up.

Desert Breeze Publishing is my publisher. I think they did a wonderful job on the cover. The books is available in eformat and print.