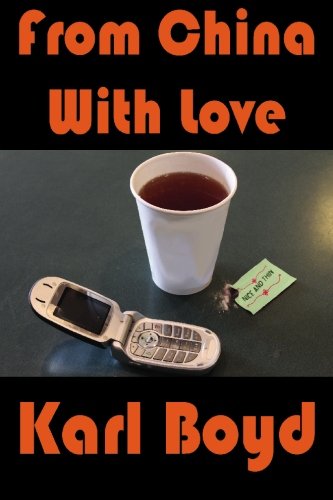 Book: From China with Love by Karl Boyd

about this book: About the cover and title:

The cover of "From China with Love" features three items; a cup of coffee, (or it could be tea), plus a packet of a new, delicious artificial sweetener, and a cell phone, (both manufactured in China), which are the key components of a master plan to take over all of North America in five days without, essentially, firing a shot.

The title is another play on words, and the same as an old-time movie of the same name. At the time I selected it, the title seemed very appropriate, and still does. I believe my readers will understand when they reach the final pages.

Synopsis of "From China with Love":

Due to poor planning and environmental damage in the past, the viable land for cultivation or crops in China has diminished to a point where it can no longer sustain its population. If China is to survive, it must have more land and resources, so the Chairman is faced with two solutions; either initiate WWIII by attacking nearby countries and thereby reducing China's population, (and theirs), through attrition, or find another more resourceful solution to his problem. Rather than ravish and possibly bankrupt his country, he looks to the West and North America, where land is readily available.

If somehow the population of those three countries, (Canada, the Unites States, and Mexico), can be quietly reduced to a point where they cannot retaliate, then a "New China" can be established to house and feed his people.

So he tasks his ministers to formulate such a plan. They do, and the devious results affect not only those he asked for, but everyone throughout the world.

"From China with Love" tells the story of this silent, sinister attack, how it succeeds and what happens during and afterward. The tale gives the reader an idea of what we may expect some day in the future if we do not find peaceful solutions to the problems of the world. The prologue says it all:

In the beginning, the Bible says God created the world in six days and rested on the seventh.

The history books of the future would record it took the Chinese one day less to conquer all of North America without, essentially, firing a shot. From that day forward, they never paused for a moment.

At one second after midnight on the west coast, or the first tick of the clock on a cold, late winter day, there were approximately three hundred million residents in the United States of America. An additional thirty-two million souls lived in Canada, while one hundred and nine million people resided in Mexico.

Five and one-half days later, at one second after noon, Eastern Time; and the corresponding times in the Central, Mountain and Pacific zones, plus those of the Hawaiian Islands and Alaska, given the average natural deaths and births each day, the number of warm bodies numbered nearly the same.

The only difference was; nearly seventy-two percent were dead.

More than one survivor wondered what God thought about all of this, or if He even cared anymore.

My son, Kristopher, and I travelled to Cabo San Lucas for a weekend of Marlin fishing. When I made the reservations, I forgot college spring break would take place at the same time. As a result, the beaches and quay were packed with young students, all of whom had their electronic gadgets, i.e., cell phones, IPods, cameras, laptops, etc.

As we were glancing around, Kris made the comment, "Some plastic company is making a lot of money from all those products."

So I asked, "What if they were all made of a plastic explosive?"

And the story began to build in my mind. On the plane home, I began making notes, and for the next 21 days, the tale poured out of my imagination and onto my compute screen. I hardly slept until it was finished. Then a year of editing and fine-tuning was required before "From China with Love" was published.

Everyone that holds a love of the United States and North America deep in their heart will want to read a foretelling of the future if we don't change our ways.

Along the way most readers will recognize the behavior of a character as that of a friend, someone they have met, or perhaps themselves. Moral fiber, determination, personality, spirit and temperament play a huge role in deciding who will live and those that won't survive to see another sunrise.