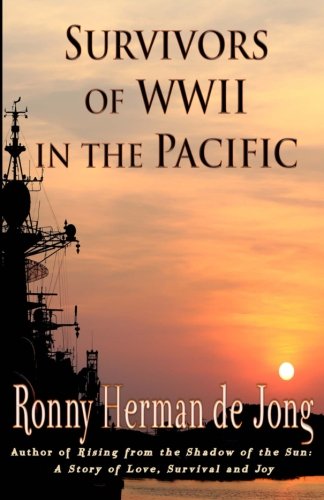 Book: Survivors of WWII in the Pacific by Ronny Herman de Jong

about this book: 75 years ago, on August 14, 1945, the Japanese surrendered after a bloody three and a half year war to get the monopoly in Southeast Asia. Millions died a cruel death. Most of the Survivors of the Armed Forces and the Japanese death camps are no longer with us to celebrate the 75th anniversary. But I am a child Survivor of the Japanese death camps on Java and I was able to interview four Navy men and several camp survivors in 2013/2014 and publish their stories in my book SURVIVORS OF WWII IN THE PACIFIC.

EDWARD SOWMAN was a Pearl Harbor Survivor; JACK C. HARPER was One of America's Youngest Warriors; BENJAMIN CANDELARIA was a Communications Specialist who served in three wars. GUY WILLIS served on the troop ships home (My Navy days 1945-46 and 1950-1954). They had all become my friends.

The cover of my book shows the USS Missouri in Tokyo Harbor. The Instrument of Surrender was signed on her deck. I was there in 1995. Now she is a Museum Ship at Pearl Harbor.

VERA RADO, WALTER HOBE, HANNIE BLAAUW and JEANNETTE HERMAN-LOUWERSE, to name a few, contributed their own stories of camp and prison life. Some of them are still alive. Their stories and those of other POWs are an important part of US History of WWII in the Pacific. They deserve to be remembered.

Please read them and remember what they went through so we can celebrate today.