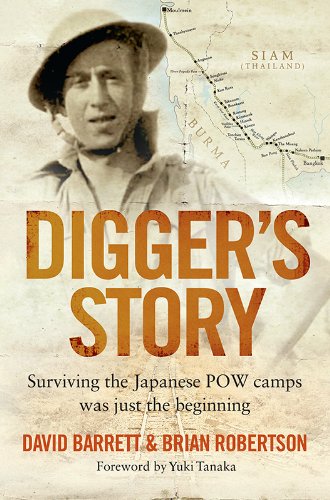 about this book: David (Digger) Barrett was a young man from Melbourne, Australia who was passionate about joining the army, in fact he joined the militia (the home army), the 16th Field Ambulance Cavalry Division, to be precise, by the time he was 15 years old. He was in the regular army (the 2/9th Field Ambulance) as soon as he could be and off to Malaya. He was destined never to rise above the rank of medical orderly (private equivalent), even although it was offered him, but was a leader of men despite that from day one. His leadership was not so much on the battlefield because that battle didn't last very long and like thousands of the others he was a prisoner of the Japanese from February 1942. It was in the camp in Changi and on the Siam to Burma railway where digger's leadership came into play, during battles against brutality, humiliation and starvation. He never gave up, never let his spirits down and kept all his mates on a high also. He would take the lead in stealing, in illegal trading and where necessary killing just in order to eat and survive. His medical skills, meagre though they were, were put to good use from deciding what to eat to amputating a gangrenous foot in order to save a life. And even well after the war David founded the Australian Reparations Committee in 1986 to sue the Japanese through the United Nations for an apology and compensation. He and his group kicked up such a stink that the Australian Government paid each and every ex-POW of the Japanese, or their widows, $25 000.00 in 2001, just to stop them further embarrassing our then, major trading partner. Digger died in July 2012 just as our book was being published. He was a helluva bloke.

• "I am writing to let you know how much I enjoyed it (the book Digger's Story) and how impressed I was by his extraordinary experiences. . . . Tribute has also to go to Brian Roberson, for doubtless he had a part in producing an account which is a cut or two above, indeed well above, the generality of the genre, which of course is not to detract one whit from David's input—his amazing experiences. . . ."
— Jim Ellwood

Jim Ellwood was also a POW of the Japanese. He accompanied David and a few other ex-POWs to Japan in early December 2011 at the request of the Japanese POW Friendship Program.

• ". . . Okay, will wipe away my tears, put Digger's Story aside and have a strong cup of coffee. Congratulations to you both for a very fine book that deserves to do well and should be read by all the younger generation, who don't really know how lucky they are."
— Barbara L'Herpiniere; Perth, WA