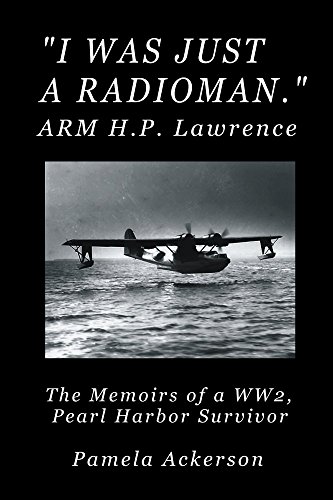 Book: I Was Just a Radioman by Pamela Ackerson

about this book: A Personal glimpse of one man into the daily life of world war 2 in the Pacific. From the day and reasons Of Henry's enlistment, his deep involvement to the conclusion of the war, one gets to see and feel the commitment and sacrifice needed to preserve our freedom.

Chief ARM Henry P. Lawrence was awarded the Distinguished Flying Cross, three Air Medals, the Navy Unit Citation, the Philippine Liberation Medal, and Air Crew wings with three stars. He was authorized a total of seven stars on his Asian Pacific Ribbon. He returned home in 1945 as Chief ARM. He was also recommended for the Silver Star, but that was not awarded.

After the war, Henry P. Lawrence spent another eighteen years in the Navy Reserves, leaving the service as a Master Chief Petty Officer

Other books by Pamela Ackerson (more)