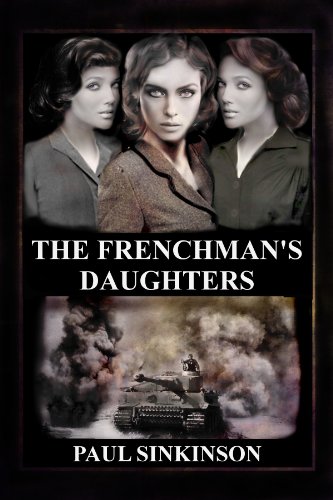 about this book: "The Frenchman's Daughters" follows the courageous actions of three sisters caught up initially in the advance of German forces and their escape to England with a small group of Allied troops in the aftermath of "Dunkirk." They undertake training alongside others and return to France, engaging in a number of actions of resistance and retribution that eventually leads them towards the Allied Invasion in Normandy.

The reason I wrote this novel was that I was brought up in the 40's and 50's listening to the accounts of family members caught up in WW2 and especially the aftermath of Dunkirk and their escape back to England, as well as heroic accounts of family members serving with the Royal Australian Airforce. I have lived in South West France since 2003 listening to accounts of resistance members involved. For these reasons I felt the need to write this fiction novel entwining the plot around factual events of that time.

The Title was chosen really as a tribute to the daughter of a French Mayor from Northern France who warned my own father of the impending arrival of a German patrol, which allowed him to make his escape.

The most enjoyable part of writing this work over a two-year period was researching the beautiful, often remote areas of France and Spain where all the actions in the novel takes place and in absorbing the atmosphere and memories from some of those that were involved.

I learnt a great deal from this, which I am sure will be transmitted to the reader who will gain from the experience with perhaps a greater understanding of the emotions, passions and the brutality of war. Also, by them being able to follow the areas of the storyline using the place-name references, they can track the regions via the usual internet mapping and satellite viewing systems.