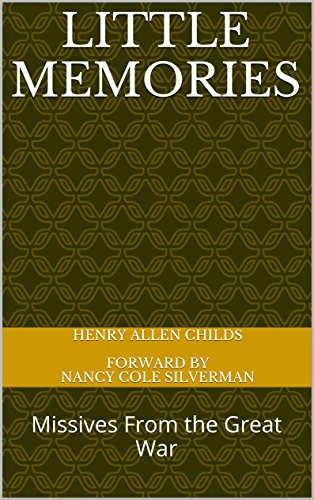 about this book: Recently, after I finished my draft for my third book in the Carol Childs mysteries, Beyond a Doubt, I had time to clean-up my office and I came across some old onion-skinned carbon paper copies of a work my aunt had transcribed. They were letters written by my Great Uncle Henry, from the front lines of World War 1, what was then called the Great War. I spend the next several days cleaning them up and uploaded for a self-published book with amazon.com They offer a wonderful insight into the brotherhood of men that went to fight in that war. He deliberately did not choose to write about the bloody, fearsome, war-field scenes, but instead of the humanity that existed between the men in the foxholes and the glimmer of hope he saw and brought home with him. He writes about the sound of the bagpipers that welcomed him home from battle as he and he Scots-Canadian brothers marched back each day, and of the small doll he found buried beneath a tree where he'd sought refuge after a battle. I share these with readers interested in knowing more about that time and the men that fought so bravely and hope they might be some comfort to others. I suspect he would have liked that.

And for those who noticed the similarity in names from the character in my new series, Carol Childs, with that of my great uncle...its no coincidence.