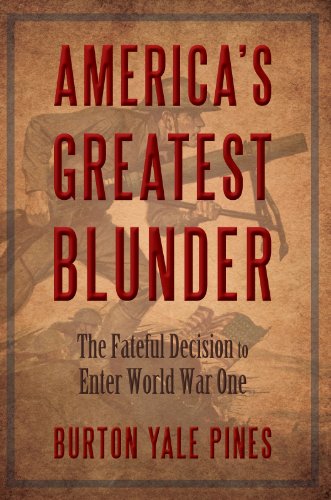 about this book: Was America's entry into World War I a massive mistake that helped lead to Hitler, WWII and the Cold War? This is a question which I, as a journalist and trained historian, was asking myself for several decades. After all, America had no reason to enter the war; our national security was not threatened. Why then did we do it?

Eventually, about five years ago, prompted by the approaching centenary of WWI's 1914 outbreak, I started researching the topic. What I found astounded me. It was clear that America truly blundered into the war. Though we ostensibly were neutral, we almost immediately and began favoring Britain and France over Germany. Moreover, we, I discovered, were bombarded by very powerful – and successful – British anti-German propaganda. And then, when in 1917 we entered the war, it was our doughboys who won it. (I know that will offend the Brits and the French.) Two million of them, fresh and eager, broke the Western Front stalemate and allowed the British and French to impose their draconian peace on Germany.

I concluded that not only did we make a mistake by entering the war, that mistake had horrible consequences. It launched the new 20th Century on its decades-long path of violence and destruction. And if we hadn't entered the war, I asked myself, then what? My answer is that the exhausted opposing sides, however reluctantly, would have had to make a peace of compromise. There would have been no victor, no vanquished, no punishing Versailles Treaty, no reparations and no German cries for revenge – and thus no Hitler, no World War II and probably no Cold War.

Having drawn these conclusions from my research and analysis, I knew I had to write the book. And I knew that it had to be written in a way accessible to the general-interest reader. I hope readers feel that I've succeeded in doing so.

I knew I was taking a big risk by writing such an unorthodox (and provocative) tale of a major historical event. Would I be trounced by reviewers and experts? Happily, so far I haven't been. Early reviewers (to my delight) seem pleased by what I written. Publishers Weekly calls my book "An epic exercise in historical speculation" and a "daring thesis, buttressed by a sweeping review of sentiment at the time." A review by the past president of the World War One Historical Association calls the book "solidly researched, convincingly argued, and at times fascinating…[It] radically changed this reviewer's perception of the US entry into the war." And Kirkus Reviews states that "the book balances expertly narrated accounts of battles with vigorous extrapolations of what might have happened if those battles hadn't been fought...[Its]main arguments are immensely insightful."

This is a great book. It taught much about WWI and, as important, about how U.S. policy is made. The book's fast-paced, fluid narrative makes it a perfect way for the general interest reader to learn about the Great War.