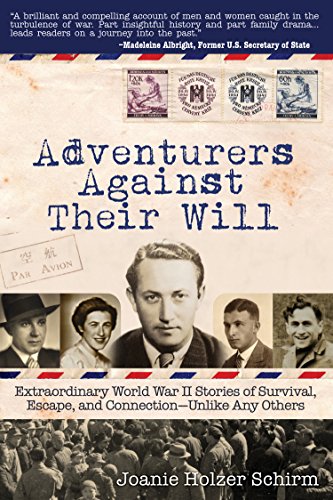 Book: Adventurers Against Their Will - Extraordinary World War II Stories of Survival, Escape, and Connection-Unlike Any Others by Joanie Holzer Schirm

about this book: It was March of 1939, the world was erupting into violence and the Nazis were invading their beloved Czechoslovakia. Families were shattered and life or death decisions needed to be made in an instant.

This is a story that might never be told if not for a stunning discovery. After her parents died in 2000, Schirm found, hidden in some old Chinese boxes, four hundred letters from 78 different writers to and from her father. When translated, the letters revealed an amazing story; an unprecedented documentation of events that changed the course of history forever.

Joanie: "I broke down and cried when I read the first letter. It was heartbreaking. I had no idea…"

Schirm's relentless worldwide search for her family's history uncovered a gripping true story of relatives murdered in death camps; of young friends and their dramatic escape to 4 continents. The friends, who had gathered during peaceful times at Prague's Manes Café, reveal stories about the will to live, the nobility of human dignity, and the pain and guilt of betrayed lovers and friends and family left behind.

Joanie. "These letters, which took months and sometimes years to get from sender to receiver contain nothing less than the essence of my family and my father's friends, the fabric of the culture and the hope for all mankind."

Adventurers Against their Will. Their lives are about to change forever. Sometimes fact is more dramatic than fiction.

• "…Joanie's writing style is stellar, the historical context woven throughout is fascinating, and the emotional wallop the stories pack is undeniable. A truly compelling read from a talented writer."

• "…Adventurers Against Their Will is an amazing story about survival, loss, hope and the importance of carrying on the message of generations as they pass. It made me want to run to my parents and grandparents and capture their own life stories before it's too late."

• "…You'll get wrapped up in the stories. Joanie Schirm does a wonderful job of weaving her own life story in with that of her parents and their friends during the rise of the Nazis. You begin to think you know the characters and the writing transports you to the far-off places in which the scenes are set: a smoky cafe in Europe or a mission in China."

• "…The letters take you on a journey you will not forget. These letters may have the power to help change the world. Read it!"

Video: Adventurers Against Their Will: Extraordinary World War II Stories of Survival, Escape, and Connection - Unlike Any Others