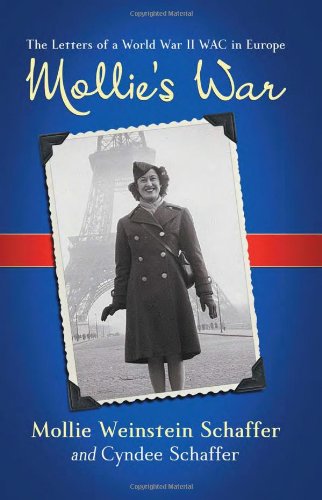 about this book: I thought I knew my mother, Mollie Weinstein Schaffer, until I started reading her letters that she sent home to her family while serving as a WAC (Women's Army Corps) stationed in Europe during WWII. I discovered a completely different person than the person that I knew as my mother. She was a quiet, unassuming woman who would never volunteer for anything and seemed to be afraid of her shadow. Yet, as I read her letters—over 350 of them-- and asked her questions, a different person emerged. She was a true member of the greatest generation, one who was brave and patriotic, and stood up for her rights and those of others as well.

My mother and I began working on her book in 2008 when she was 91. "Mollie's War" was published in 2010 by McFarland Publishers, a traditional publisher. When I wasn't reading my mother's letters and asking her questions, I was doing research at the Pritzker Military Library in downtown Chicago and getting guidance from the head librarian so that I could put proper perspective about the events occurring around my mother. She also helped me to find my publisher.

"Mollie's War" is a book based on those letters. It follows the travels of Mollie as she enlisted in the WAC in September 1943, trading the comforts of her family and home in Detroit, Michigan for an unknown adventure in wartime Europe. She was an eye-witness to the destruction caused by war but because of war time censorship, she was not able to divulge any information about her surroundings. She was upbeat and always willing to help others. Reading between the lines of my mother's letters and reading my added historical commentary about the events occurring at that time, the reader learns that my mother and her fellow WACs did not have an easy time and yet they never complained.

Seeing the smile on my mother's face when she held her book, "Mollie's War," in her hand was priceless. Peppered throughout her letters was the fact that she wanted to write a book… and it happened—only 65 years later!

Video: Mollie's War - The Letters of a World War II WAC in Europe