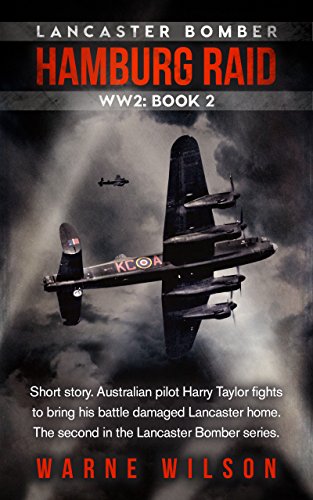 about this book: My first book, a short story in this genre, LANCASTER BOMBER TAIL GUNNER, has proved so popular since its launch in 2015 that I felt encouraged to follow it with this story, LANCASTER BOMBER HAMBURG RAID. I was born in 1934, (A very good year they tell me!) and I was just old enough to store vivid memories of wartime and its effects on Australian life during the six years 1939 - 1945. I saw Lancaster G-George land at the Ballarat aerodrome in 1944 during its tour to raise money for war bonds, and 30 years later I saw G-Geoge again as a permanent exhibit at the Australian War Memorial. My latent interest in Lancasters was awakened when a friend in Rotary told me of his experiences in Lancaster night raids over Germany. I did a lot of research into the aircraft, the layout, the engines, biographies of the young men who flew them, together with films and books such as The Dambusters, and The Battle of Britain.I combined this with my personal knowledge of the physics of flying; I was solo in gliders, taking part in competitions for several years, sometimes running out of air and landing in farmers fields and sometimes soaring to great heights under storm clouds.

The writing when it came, was the best part, I found I could identify with the crew, I was flying with them as they faced the enemy, not knowing if the next minute would take them to a fiery death. Some cemeteries in Germany have many rows of seven headstones, each row marking the graves of the seven members of a Lancaster crew.

When you finish reading this short book, pause for a moment in thought for the young men who played their parts so well.