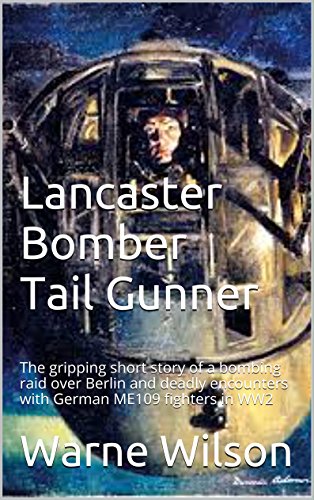 Book: Lancaster Bomber Tail Gunner - The gripping short story of a bombing raid over Berlin and deadly encounters with German ME109 fighters in WW2 by Warne Wilson

about this book: This is a true story about Harry, a fellow member of my Rotary Club years ago told me of his survival as a tail gunner after completing his tour of 30 raids. Tail gunners during those fearful years of World War 2 did not usually survive and the tales are many of them being "Hosed out" after a fighter attack from the rear. But quietly spoken Harry related this experience to me in the 1980s, he had returned to his job of selling cash registers after the war and in fact, he had more pride in his sales achievements than in his survival.
He retained regret at having killed the fighter pilot in this story to the end of his life.

The book has attracted many favourable (UK spelling) reviews including the following;
1) Why I chose this book : WW2 remains one of my favorite topics of interest
2) Any coarse language present : None present tho were I gunner in similar circumstances I'd of had a hard time holding back
3) Type of book : Short historical WW2 aviation story
4) Formatting/Editing : Well-written
5) Best/Worst aspect of book : Engaging tale tho gives only the briefest taste of an otherwise horrifying experience
6) Favorite passage : "An aircraft had been hit. A cluster of magnesium incendiariesblew apart to fall like a glittering curtain. Harry saw the aircraft in flaming pieces floating downward in the brilliant sky."
7) Bottom-line : Leaves me wanting more - Great book!