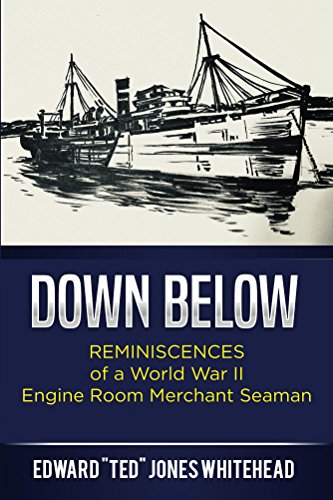 about this book: World War 2 perils and adventure as never told before, from the eyes of a merchant navy engine room seaman.

Step back with Ted (born 1923) and relive those turbulent years in which you never knew if the next voyage would be your last and discover first-hand how these brave men literally lived and died.

Ted takes the reader from his native Wales in the Rhondda Valley, to global journeys on numerous ships pursued by German U boats. The story is told with accurate and at times humorous description. The narrative takes the reader to Canada, where his ship the S/S Lilly was torpedoed on his first Trans Atlantic crossing. After to New York, The Caribbean Islands including Trinidad and beyond.


ABOUT THE AUTHOR
Edward "Ted" Jones Whitehead, now 97, was born in the Rhondda Valley of South Wales in 1923. Orphaned at nine he spent time with older brothers and sisters until he left school at sixteen. While attending secondary school, his English master would give him the day off for superior essay writing – a talent he has maintained throughout his life.

At eighteen after leaving a literally rubbish job in England, Ted found himself at the Swansea sea port in South Wales. There is where his ocean going began during World War II in the dangerous engine rooms down below and his globetrotting journeys lasted for the next forty years. Ships took him to every continent except Antarctica and as a senior his wanderlust has not stopped.