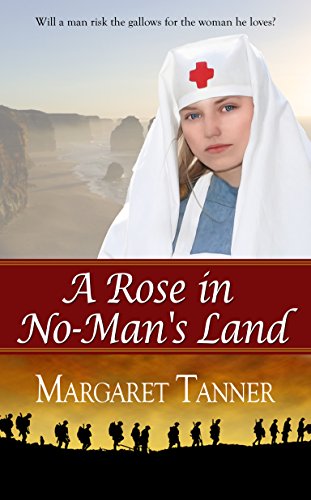 Book: A Rose in No-Man's Land by Margaret Tanner

about this book: As an unpublished manuscript this novel was awarded 1st prize.

In the 1st World War, the soldiers in the trenches fondly referred to the nurses who tended their wounds as the roses of no-man's land. And this story is a fictionalised account of one such nurse, Amy Smithfield.

Sister Amy Smithfield an Australian Army nurse meets an English Captain, Mark Tremayne. Their love is forbidden because Mark is bound to another woman – his dead wife. Blackmailed by his sister-in-law, who has in her possession an incriminating letter, he can never marry again or tell Amy the truth, unless he wants to risk the gallows for a murder he did not commit.

Mark's chances of surviving the trenches of France grow less each day, and in desperation, the couple risk a few nights of passion in Paris. The lovers are discovered and Amy is banished to London in disgrace.

Amy, struggling to survive the poverty and bombing of London's East End, discovers she is pregnant.

Will Mark risk the hangman's noose to marry her?

This is a well researched novel, as I have always had an avid interest in the Great War. I was fortunate to have visited the battlefields of France and Belgium, a truly poignant experience. I also had access to letters and diaries from relatives who served in this conflict.