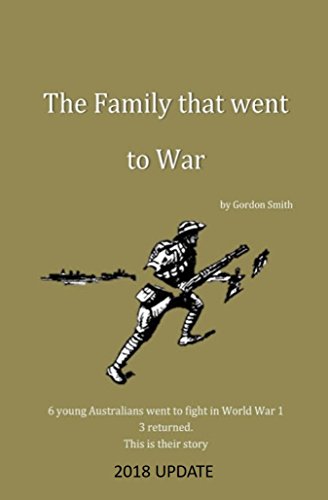 Book: The Family that went to War by Gordon Smith

about this book: The family that went to War is my first book. After retiring I began to research my family tree where I discovered stories about my relatives who fought in the 1st World War. This gave me the inspiration to write "The Family That Went to War.

It is the story of 6 young men from the same family in southern New South Wale who went to fight for King and Country during the Great War.

We follow their journeys through training and to various battlefields including Galipoli and the Western front.

We share their adventures and the rapid change from simple country people to men of the world. It shows the spirit of those brave men and also the highlights the worries and concerns of their families.

We share the anger of a mother who demands the army release her underage son who lied about his age and later on the tearful correspondence as she tries to locate the effects of her son who was killed at Fromelles France and to this day (100 years later) his remains have never been identified.

We also share in the loss of two other family members.

This is a sobering account of life during those dark times and yet, there are many light hearted moments ti share with the reader.

As the subtitle says, "Six went to war, only three returned.

• "This is a raw and realistic look at what war is like, for those serving in it, and for those left behind to wait. In this case, three of the families waited in vain." — A. Hepburn, Amazon reviewer

• "Early on in the last century, the men in the Power family of Cootamundra, Australia went to war. The Family That Went to War recounts those experiences with almost clinical detachment. Despite the more or less dry, clinical prose, the author, Gordon Smith, has painstakingly researched the underlying history and treats it with respect. How? By not embellishing what cannot be embellished and by not trying to rely on a reader's overt sentiment in order to make an emotional connection." — Marta Tandorion