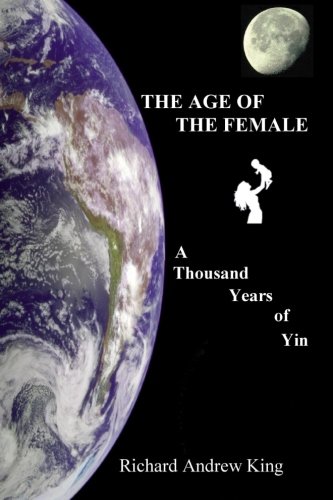 Book: The Age of the Female - A Thousand Years of Yin by Richard Andrew King

about this book: Times change. Lengths of time change. Seconds, minutes, hours, days, weeks, months, years, decades, and millennia all change. What is critical to note is that the energies of time periods also change, energies which are marked by numbers.

THE AGE OF THE FEMALE – A THOUSAND YEARS OF YIN chronicles the massive change between the last thousand years – the Age of the Male, the 1 energy, to the Age of the Female, the 2 energy in which the world now resides.

Besides governing the female and all things Yin, the number 2 also governs relationships, others, indirect action, opposition, confliction, division, teamwork, support, balance, war and peace. THE AGE OF THE FEMALE discusses all of these aspects and explains why this age in which we are now living is filled with turmoil, division, separation, terrorism, and relationship challenges on a national and international level.

THE AGE OF THE FEMALE – A THOUSAND YEARS OF YIN by Richard Andrew King is an affirming, guiding light.

Kaye Young remarks . .
• "I was mesmerized by Richard Andrew King's THE AGE OF THE FEMALE – A THOUSAND YEARS OF YIN. How unusual for a book about female ascension to be written by a male – an insightful and thorough male, I might add."

Available in Paperback only.