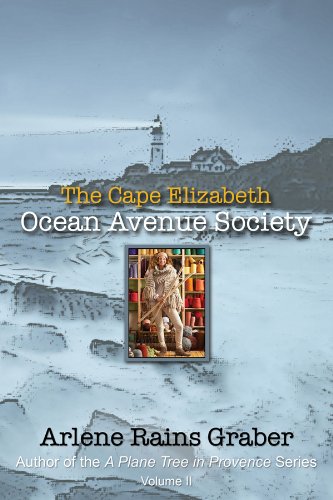 about this book: This novel is the second in the A Plane Tree in Provence series, and centers on Penny Wilson who owns the Designers Pen, a needlework shop in Cape Elizabeth, Maine. She and her husband, Michael have two sons, and live in the tiny hamlet of Cape Elizabeth. All is well until Michael is spotted with another woman. Harmless? Maybe, but then it could be quite the opposite.

When confronted, Michael refuses to explain fueling confusion and anger by both parties. An argument builds and in the heat of the fight, Penny asks Michael to move out. With her otherwise comfortable life in chaos, Penny leans on her friends, Wendy, Rose, Vernie, and Sarah in The Cape Elizabeth Ocean Avenue Society. The group formed after the women took a three-week holiday to France.

Challenges arise in each woman's life, but there are also fun times with shopping, redecorating their homes, parties and spirited Society meetings.

For Penny, added complications set in when she begins having medical issues. Are they a result of her emotional state? Could be, but then again, maybe not. In the meantime, she meets Chris Collier, who has just lost his wife to cancer and is lonely. The two strike a friendship and begin seeing each other. He fills a void, but it is her husband who owns her heart. When Michael hears about Chris, jealousy rears its ugly head and he accuses Penny of the very thing she had accused him of.

Even so, will it draw Penny and Michael together or push them apart forever?