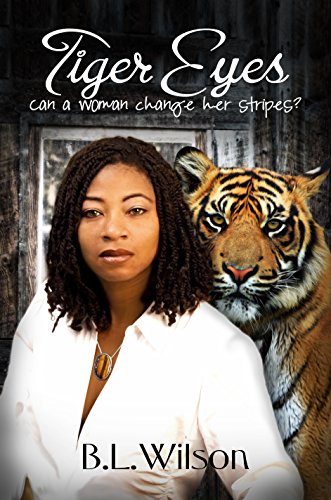 Book: Tiger Eyes - Can a woman change her stripes? by B.L. Wilson

about this book: 'Tiger Eyes, can a woman change her stripes?', explores the contentious relationship between a famous doctor, Bedford Riddle, and his estranged police sergeant daughter, Elaine. Tensions explode when Elaine discovers her father confided a terrible secret to one of her girlfriends rather than her. In a fit of jealous anger, Elaine banishes the girlfriend from the ranch and her life.

Thus begins Elaine's journey of self-discovery. Should she let go of an old family rift that occurred between her and her father before it is too late? Should she allow herself to let her guard down and admit the love she has for the girlfriend then take the next logical step? Can a woman who thinks she has life figured out change her stripes?

I wrote this book in 2003 to honor my father. He had died the same year terrorist blew up the World Trade Center Towers and I missed him so much. I wasn't there when he died at home in his own bed. I hadn't seen my father in almost a year so I felt guilty that he died before I could say goodbye. He and I always had a contentious relationship. He wanted me to behave and listen to his and my mother's words of wisdom but I thought I knew more than he or my mother ever would. I took every opportunity to tell him what I thought.

Whether it was at the dinner table, in front of his friends, or the breakfast table before the school arrived, it didn't matter. As long as I had a breath, I was going to tell my father whatever was on my mind. Most of my unedited thoughts angered my father. Back then, girls…daughters didn't speak the way I did, especially one that he created. I lost count of the number of spankings I received where I needed a pillow to sit on to eat my next meal. I was a rebel with no cause. My parents wondered how I would survive in the real world. I did too. If you haven't guessed by now, I modeled one of the main characters and her relationship with her father a bit after me and mine.