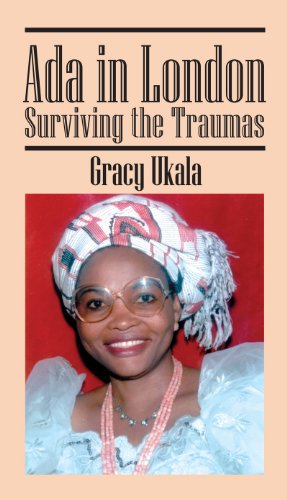 Book: Ada In London - Surviving The Traumas by Gracy Ukala

about this book: Ada in London – Surviving the Traumas by Gracy Ukala is about a black lady who is persuaded by her manipulative husband to leave her home and family and relocate to London – to save him the embarrassment of losing everything. Her husband, Fred, had lost a huge some of borrowed money in a failed business trip abroad. However, instead of owning up to his own mistakes and doing something to put things right, he manipulates his wife, Ada, and sends her to London to work, so that she could raise the money he needs to pay off his debt. But Ada's worst suspicions come to pass. Fred not only collects money off her, he also uses the opportunity of her absence from home to date other women, and eventually choosing to marry two more wives, even though he and Ada were legally married and also in a Christian church many years ago.

Ada struggles to cope with the very cold London weather and does her best to keep her marriage vows. In order to pay her way in London, she takes on menial jobs which test her endurance ability to the limit, taking insults and unhealthy advances from unscrupulous bosses etc. She suffers a lot of discrimination, finds herself in many difficult situations and worst of all, and suffers a lot of traumatic losses - her parents, her beloved career as an outstanding head teacher, her marriage and much more.

This novel is about survival, especially survival within a very foreign and strange environment with no real support from the one person you thought loved you – your husband, your parent, your wife, even your child. This novel is not only about immigrants in a foreign country, it is also about anyone who is going through difficult times alone. It is about using your own staying power, your self-reliance and, even more, your faith, to pull through difficult times, so that you can rise and shine again, just as Ada does.

Ada in London is a very racy, very well-written novel which is full of suspense. It is targeted at women, men, and young adults who have life decisions to make and difficult circumstances to overcome. This is a must-read novel.

Ada in London, Surviving the Traumas is available on Amazon.co.uk in both Paper back and on Kindle. You can also purchase a Paper back copy directly from the author's website: http://www.graceukalaswritings.com.