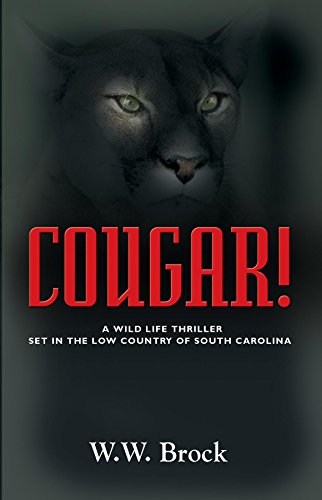 about this book: Constantly driven from his kills by a coyote pack, and needing twenty pounds of meat a day for sustenance, a large cougar turns opportunistic man-eater in the Little Pee Dee Swamp near Myrtle Beach, South Carolina, thus setting the stage for an investigation that will blow the lid off a secret plot to re-introduce super predators into local environments across the United States.

Fish and Game Officer Michael Tucker is twenty-seven years old, five feet eleven inches tall with a medium, but muscular build. He wears his hair close-cropped, and, even in the ninety-five degree heat of these mid-September days, his uniforms always have that just pressed look that had been ingrained by a six-year hitch in the Marine Corps. Coping with a mild form of PTSD brought on by two tours of Iraq and Afghanistan plus the death of his parents while he was deployed, Tuck cannot express his frozen emotions except where his girlfriend, Hanna, is concerned.

Sergeant Michael Tucker and Captain Robert Pike are called to the scene of a car accident to view a body that has been partially eaten by a wild animal. They find that this simple investigation will become race against the clock to stop a man-eater before it kills again, and will also uncover a conspiracy that has tentacles reaching deep into the highest levels of government, placing their lives in jeopardy.

• "Apart from The Bible, Cougar is the most captivating and riveting book I have ever read! Reading it in the Pee Dee River swamps I work in only made it more real." — Tom Naumann, Professional Hunter

• "If you've ever baited a hook and cast a line or loaded a gun and stepped into the wood line, you know to expect the unexpected. W.W. Brock tests all of your senses in this riveting tale of trust, fear, intrigue, and deceit at the highest places in government in the most unlikely place in the country, quiet Myrtle Beach, South Carolina." — Lieutenant Colonel Bob Sumner

• "I thoroughly enjoyed this book! Couldn't put it down! Not sure I will ever go camping after reading it. Too many scary critters out there!" — J. A. Godfrey

This is one awesome book! If you haven't read it...get it now then follow up with the others in the series! You will be captivated and thrilled at the suspense, action and story! [by Janette Sumner]

All W.W.'s books are riviting. This one is no exception! It's full of surprises so you can't put it down. I'll be sad to see the series end! [by Mary Dallas]

I'm a person who does not read many books. They have to catch my attention quickly and then hold it so I'm not bored. I don't like to take days reading something either. I did this book while on vacation in 3 sittings. I'm already to start the next book in the series as soon as I can get caught up on everything undone while on vacation. I would highly recommend if you like a thriller and action to get a copy and read it. You won't be disappointed. [by BT from TN]