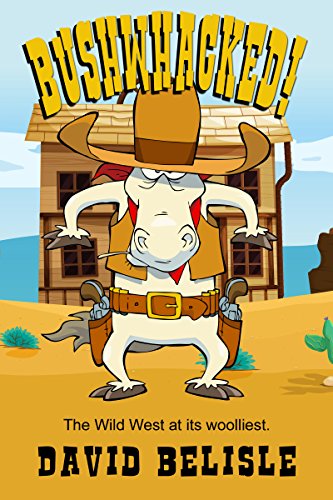 about this book: "Bushwhacked!" is an empty-the-saddle-bag send-up to the American West. This is the Wild West at its woolliest, triple-H stuff: High-falootin'-High noon-Historical fiction. Belisle shoots from the hip with 1876 in his sights, a year featuring the likes of General Custer, Wyatt Earp, Jesse James and a Blazing Saddle posse of ornery cowpokes.

Enter Giovanni Sacchettini, an olive farmer from Sardinia. He's on the run from the European authorities following between the Royal sheets shenanigans with the King of Sardinia's daughter. Gio's father wanted him to join the royal protection racket but Gio's simply not the hard-pressed olive type.

The young Sardinian embarks for America and, following more hopes broken in Hoboken, he sets his covered wagon sail on a "go west, young man" course. That would be a demand, not a suggestion. Will Gio find safe haven or have to get outta Dodge too? It's survival of the dimwittest. Hold onto your hat as Gio tries to take the Wild out of the West … or will his heels be next up (down?) at Boot Hill?