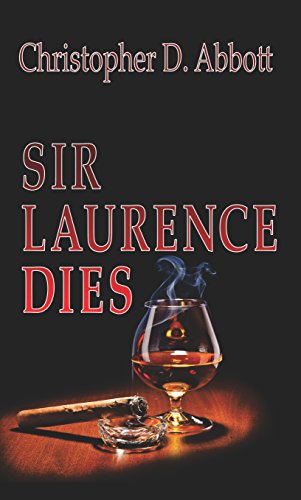 about this book: Sir Laurence dies is a character driven closed room murder mystery. It would appeal, I think, to fans of murder mystery classics such as Agatha Christies' Poirot, Sherlock Holmes, or many other British whodunits.

The book took about 4 years to research and write, although I didn't work on it every day until 2011, where I probably worked for 4 weeks straight to finish it. After the book was completed, it took me about 1 year to fully edit it. I started publicising it at about this time. The last stage fell to Wendy Bertsch of Ocean Highway Books, who copy edited and formatted it for me. My process was simple. I used to start at about 9pm and write at least 2000 words a night. The next morning I would review what I'd written and in the evening, continue the process again. I found my most creative time was late at night.

I came up with the idea for the book from reading and watching detective stories. I have always been fascinated by the process of criminal detection, both real and fictional, and I wanted to see if I could actually sit down and do it. Believe me it's not as easy as you might think. I began creating the characters. They went through a few name changes as the book developed, but essentially their personal characteristics remained true from day one. I felt I needed to have the backstories already written before I started telling the story. That way, when my detectives went about researching themselves, I had sources of material for them already written. Some of my characters were modelled on people I had either met in life, or actors I'd watched in films, but modified for the period. Lady Agatha's name, for example, was in essence an acknowledgement to Dame Agatha Christie. She was the first person I wrote and her backstory is quite extensive.

The reason I choose the period of 1930s London was down to Doctor Straay himself. I made him a criminal psychologist, but whilst psychology was very well known in the period, it wasn't fully employed in police work. I needed to have someone who would be credible and authoritative, quirky even, but not a policeman. I needed a sidekick, if you like, but didn't want to fall into the trap of having an idiot asking stupid questions. I felt that Doctor Watson, who was always consider Sherlock Holmes' stupid friend, was in fact a highly intelligent medical professional, and that Doyle never wrote him as stupid, even though he himself referred to him as such. That was when I developed Chief Inspector Drake, an intelligent, diligent police officer who could add some official authority to the story.

I wanted the title to be something catchy and simple. I was sitting at home, looking along the spines of all my books and one popped out. "Lord Edgware Dies" – it's really that simple.

I researched almost everything I could, police and coroner procedures. I also looked at the kind of psychology being practiced and tried, to the best of my ability, to use terminology that was right for the time.

I learnt a lot about structure, pace, and plotting. I also wanted to give people all the clues they needed to solve the mystery themselves. As of yet, no one has told me they worked it out, but equally, those same people have told me that when it was put in front of them, it was all there. Job done.

Let me tell you a little bit about the cover. A man called Richard Sutton created this beautiful cover for me. Not only did he want a full synopsis of the book, but he read the first 5 chapters to get a better understanding of the story. He sent me 3 ideas and when I realised that Richard had got it, I sat back and let him create – the result, in my opinion, speaks for itself.

To my readers I would like to say this: This is my first book, I'm not sensitive to criticism, and I welcome it. The more feedback I can get the better an author I can become. I also hope you enjoy the book as much as I did writing it!