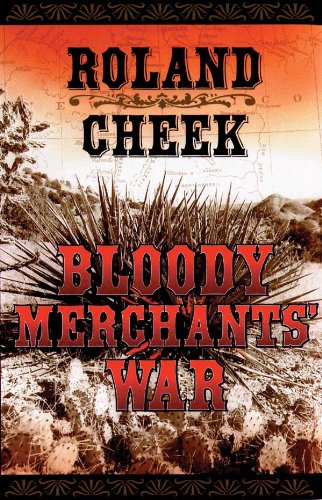 about this book: Few individuals are better qualified to create and depict those characters, scenes, settings, actions, and atmospheres that made the Old West a place of legends and heroes as long time guide, Roland Cheek (me). When the robust sexagenarian isn't hiking, climbing, riding, and rafting through the still-wild parts of the Northern Rockies, he writes about the places he's been and things he's seen.

With two decades of newspaper columns, hundreds of magazine articles, and six previous books depicting the West as it is today, why wouldn't the man qualify to write of the West as it was?

He does. And with his previous historical Western, Echoes of Vengeance, I think I proved it. Now comes Bloody Merchants' War, the second in my Valediction for Revenge series of six novels depicting the life of Jethro Spring, a man born of an Indian mother and a white father, a man who passes through both worlds without feeling at ease in either.

Bloody Merchants' War is set in Lincoln County, New Mexico. It includes, as any tale of that era and place must, Billy the kid, John Chisum, alexander and Susan McSween, John Tunstall, and the Santa Fe Ring.

In retrospect, Lincoln, New Mexico Territory, was not the place to be on August 6, 1877, especially for a man wishing to avoid trouble, as happens to Jethro Spring ...

My readers deserve accuracy therefore I went back to Lincoln County double checking the settings and scenes, not much has changed on the landscape since 1877. Remember, E.L. Doctorow said, "Everybody knows novelists are liars, therefore they are the ones who can be trusted to tell the truth."