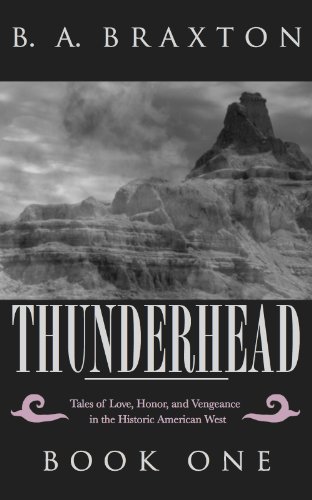 Book: Thunderhead - A Novel of the Historic American West, Book One by B. A. Braxton

about this book: The Thunderhead Trilogy spans a ten-month period in the lives of three primary characters: Al Franklin, a photograph artist, "Spittoon" Nicky, a sporting girl, and Harvey M. McCafferty, a bounty hunter. Chapters alternate between each of these three characters' perspectives, thus allowing one book's worth of text to be dedicated to each of them.

Al Franklin is an enterprising and hard-working 20-year-old who has made his way from the comfort and security of his affluent parents' home in Boston to Deadwood, South Dakota, during the summer of 1876. Al does masterful work as an ambrotype photographer, and therefore meets with all manner people, outlaws as well as the law-abiding, who are looking to have their likenesses taken. When Wild Bill Hickok comes to town at the same time as Calamity Jane and Colorado Charlie Utter, Al devises a money-making scheme with Bill to put his picture on cabinet cards to sell to the eager citizens in town. Because of Wild Bill's reputation as a shootist, a law officer, and one of the stars of Buffalo Bill Cody's show, the cabinet cards sell very well. And thus a friendship grows between Wild Bill and Al during Bill's last days.

"Spittoon" Nicky is a sporting girl who plies her trade out of a rough-sawed saloon called Hootie's Lager House. Nicky meets up with an outlaw named Chad DeMarco and they fall for one another. When things get too dangerous for him in Deadwood, Chad asks Nicky to travel with him and his cohorts so they can stay together. The most brutal and bloodthirsty of Chad's companions is his sister Maggie DeMarco, who seems to live just to find the man who murdered her mother and father when she was very young.

Harvey McCafferty is an ex-Confederate soldier turned bounty hunter whose only aim in life is to get rich as quickly as possible. Harvey sets his sights on tracking down the DeMarco gang so that he can retire on the considerable bounty that has been placed on Maggie, Chad, Luke, Ray, and Otto. And in Harvey's mind, dead or alive usually means dead.

Other books by B. A. Braxton