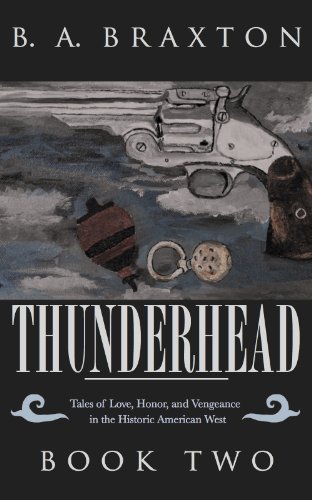 Book: Thunderhead - A Novel of the Historic American West, Book Two by B. A. Braxton

about this book: Book Two of the Thunderhead trilogy follows Al Franklin to Laramie, Wyoming, where he hopes to conspire with Colonel George May to see to it that Jack McCall finally pays for the cold-blooded assassination of Wild Bill Hickok. McCall has already been acquitted of any wrongdoing by a hastily-assembled miner's court. But many of Wild Bill's friends are under the distinct impression that the jurors have been paid off by Deadwood's underground. Since the court was held on Sioux land, the ruling was considered invalid.

Harvey McCafferty furthers his quest of getting closer to collecting the bounty on the DeMarco gang by partnering with the shady Tim Brady, who has a habit of promising to tell folks how they can catch up with the gang if they just do him a few favors first. Harvey follows McCall to Laramie to make sure his mouth stays shut about the real reason why Wild Bill Hickok has been murdered.

"Spittoon" Nicky tries to get used to a life on the run with cold-blooded killers, but it isn't easy. The hardest thing for her to witness is the power struggle between the gang's leader, Maggie DeMarco, and another member, Bloody Ray the Knife. A cool and confident Ray Bradford oversteps one too many boundaries, and the confrontation he has with Maggie at book's end can only have one conclusion: one of them has to die.

Other books by B. A. Braxton